US Sails Through Taiwan Strait, China Conducts Drills On Hainan 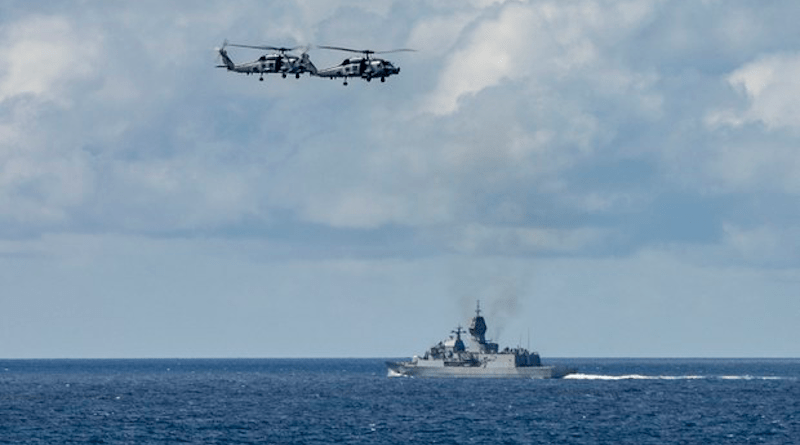 China has launched military training on Hainan island, its most southerly province, a day after the U.S. 7th Fleet announced that one of its destroyers transited the Taiwan Strait.

The Hainan Maritime Safety Administration issued a navigation warning saying military training would take place from Sunday to Tuesday close to the sea and that entering the area within a six-mile radius was prohibited.

A navigation warning is a public advisory notice to mariners about changes to navigational aids and current marine activities or hazards including fishing zones and military exercises.

The warning did not specify what kind of military training but the provided coordinates indicated the location is near China’s Wenchang Rocket Launch Site.

The statement said the transit was conducted “through international waters in accordance with international law” and “through a corridor in the Strait that is beyond the territorial sea of any coastal State.”

Before this and most recently, the USS Dewey made a similar transit on Jan. 22, 2022, and the USS Chaffe on Dec. 15, 2021. But those two ships did not turn on their automatic identification system (AIS), whereas the USS Ralph Johnson did, effectively advertizing its mission.

The 7th Fleet said the USS Ralph Johnson’s transit “demonstrates the United States’ commitment to a free and open Indo-Pacific.”

The move was heavily criticized by China. The People’s Liberation Army (PLA) Eastern Theater Command spokesman, Sr. Col. Shi Yi, was quoted by Chinese state media as saying that “such an action is provocative and aims to embolden Taiwan separatist forces.”

Shi also called the U.S. action “hypocritical and futile” and said the PLA tracked and monitored the destroyer’s movements.

China regards Taiwan as a renegade province and vows to take it back, by force if necessary.

While it’s not unusual for the U.S. navy to sail through the Taiwan Strait, Saturday’s mission took place against a tense international backdrop, as fighting intensifies in Ukraine after an invasion by Russian forces.

There has been speculation that China could exploit a situation in which Washington was preoccupied by Ukraine by taking action against Taiwan or in the South China Sea.

Beijing has rejected that suggestion, but the Ukraine conflict has at the very least highlighted the diplomatic gulf between Washington and Beijing, as China avoids direct criticism of Russia’s conduct.

The hawkish Chinese tabloid Global Times said “while the ongoing Ukraine-Russia tussle is intensifying, the U.S. military is attempting to demonstrate its capabilities to stir up trouble” in both Europe and Asia.

The same newspaper in an editorial last week warned Taiwan that the Ukrainian crisis proved that “Washington is not reliable” and there is only one option for the island’s future – “to achieve reunification with the mainland.”

The Taiwanese Ministry of National Defense on Monday said “in response to the development of the Ukrainian-Russian military conflict,” Taiwan’s army continues to “maintain a high degree of vigilance and closely monitors the military dynamics around the Taiwan Strait to ensure national security.”

One lesson that China can learn from the Russian invasion of Ukraine, according to Alexander Vuving, a professor with the Hawaii-based Daniel K. Inouye Asia-Pacific Center for Security Studies, is that a unilateral decision to take over a smaller country won’t be acceptable in modern times.

“I think China is not yet ready to launch an invasion of Taiwan,” Vuving said, adding: “But China will intensify its ‘testing’ action to test the capabilities and resolve of its opponents across the Taiwan Strait and in the South China Sea.”