US to help India project force to counter China’s naval activity: US official 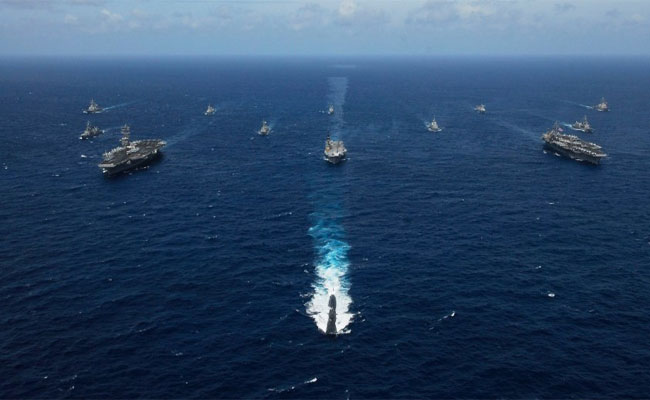 The United States will work closely with India in the Indian Ocean region to ensure a free and open Indo-Pacific and to bolster Indian abilities to project force in the face of increased activity by the Chinese navy, a senior US government official said on Wednesday.

The activities of China’s People’s Liberation Army (PLA) in areas ranging from the Line of Actual Control (LAC) to the South China Sea and the Indian Ocean fit in with a pattern of behaviour aimed at undermining the rules-based order and trying to change the status quo through coercion, said the official who spoke on condition of anonymity.

At the same time, the US is focused on helping India modernise its military and supporting the country’s defence indigenisation agenda as it fits in with American plans to help India’s armed forces move away from dependence on Russian-origin equipment and platforms, the official said. These efforts will also lead to further integration of defence industries of the two sides.

Though India’s response to the Russian invasion of Ukraine has been at odds with the reaction of the other members of the Quadrilateral Security Dialogue or Quad – Australia, Japan and the US – the official made it clear this wouldn’t become a “significant hindrance” to cooperation within the grouping.

“The operational environment in the Indian Ocean region is changing, in part because of increased PLA activity. That’s an area where we are interested in supporting India’s capabilities and abilities to project forces as well as deepening our own bilateral cooperation, operationally and in the area of information-sharing,” the official said.

“When I look to see what is the PLA doing in the Indian Ocean, what are they doing at the LAC, I see it as part of a pattern of behaviour that is connected to what is happening in the South China Sea, the Taiwan Strait, the East China Sea – which is you have a country with both the intention and the capability to undermine the rules-based order and to try to change the status quo through coercion,” he added.

The US also has concerns about PLA facilities in third countries and “its ability to use economic and military tools for coercive purposes towards regional countries”. The secret security pact signed recently by China and Solomon Islands is “part of a pattern of behaviour” and it is very clear the PLA is “looking for overseas installations wherever it can get them, and that includes South Asia”, the official said.

The official described ties with India as “one of the most important bilateral relationships in the world” and one of the “most consequential” for the Biden administration, and said the American side is very focused on helping India modernise its military and supporting the Indian side’s indigenisation of defence manufacturing.

India’s indigenisation agenda fits in with the move away from Russian equipment, a “trend that is already underway”, and the US “will look for opportunities to support this agenda”, the official pointed out.