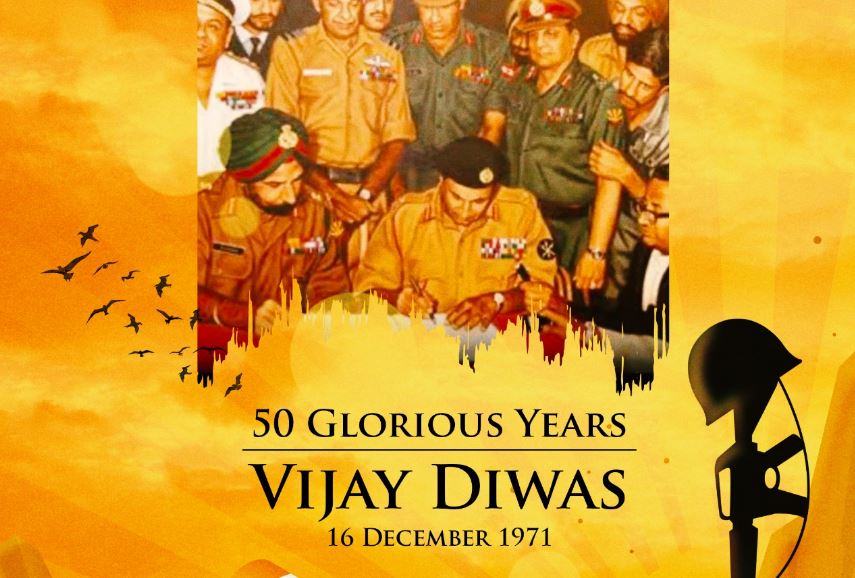 Vijay Diwas marks the passage of 50 years since the historic day in 1971. This day, the 16 December 1971, a new country was born, Bangladesh. Another country, Pakistan was vivisected after 24 years of its creation. India, the mother country was torn twice, once after a lot of bloodshed in a civil conflict, again in 1971 in a war engaging three countries — East Pakistan (Bangladesh), West Pakistan (Pakistan) and India. For Bangladesh, it was a moment of celebration, for Pakistan, one of defeat and disgrace and for India, on deeper reflection, one could say, it could be a mixed bag of feelings, as it was to engage in a bloody conflict twice in 25 years or so and split twice.

Let us recall the events around the historic moment and ponder over how we celebrate these now and in future. Fifty years is a long period in history to reflect on developments that changed the shape of South Asian region. To recall briefly, after Independence, India was divided into two countries — India and Pakistan — the latter was further divided into two territories — West Pakistan and East Pakistan. Culturally both were different. East Pakistan was, in fact, East Bengal as the Muslim majority part split away from Bengal. The part remaining with India is still called West Bengal. The East Pakistanis spoke Bangla and are broadly part of Hindu traditions although they are Muslims. Both East Pakistan (Bangladesh) and West Pakistan are on the East and West of India.

However, for India, the tipping point came when Pakistan attacked Indian airbases. Mrs. Indira Gandhi, then the Prime Minister, in retaliation, declared a full-scale war on Pakistan. In a matter of 13 days, India won the war forcing Pakistan to surrender on 16 December 1971. This momentous day is celebrated as Vijay Diwas (the Victory Day). This year, Prime Minister, Narendra Modi, in the celebration, had this to say in a tweet, “on the 50th a Vijay Diwas, I recall the great valour and sacrifice by the Muktijodhas, Biranganas, and brave-hearts of Indian armed forces. Together, we fought and defeated oppressive forces. Rashtrapatiji’s presence in Dhaka is of special significance to every Indian.”

As a part of the celebration, the golden jubilee of the victory, Prime Minister Modi, on 16th  December Thursday, conducted a solemn ceremony at the National War Memorial at the India Gate. The day is also remembered as the biggest ever victory since the second World War as a staggering number of Pakistani soldiers, 93,000 men surrendered to the Indian army unconditionally. In the celebration, the Prime Minister was accompanied by Defence Minister Rajnath Singh and the three defence chiefs. A commemorative stamp to remember the valour of the brave hearts was unveiled.

It is in order to celebrate the historic days like 16 December 1971. It displayed and exemplified the heroism, bravery, and sacrifice of Indians in liberation of Bangladesh. Note that, the Europeans remember the holocaust to reflect on the cruelties committed by the Nazi dictator. Many former colonies celebrate their independence days from the colonial empires. Democratic Counties celebrate the day of adoption of their Constitutions and so forth.

What is, however, important and necessary is to learn the lessons from history, good and bad.  To quote George Santayana, the Spanish-born American philosopher who is regarded as one of the most important thinkers of the first half of the 20th century, and one of the most prominent champions of critical realism, a critic, dramatist, educator, essayist, novelist, and poet — all rolled into one, “ Those who do not learn from history are doomed to repeat it”. He said prophetically about history and what it teaches us.

Santayana’s profound advice was articulated nicely by Rajnath Singh that ”this war tells us that the partition of India on the basis of religion was a historic mistake. Pakistan was born in the name of a religion, it could not remain one entity”, Therefore, religion is an untenable tool or basis of making a country. Religion is subjective, individual or community based, and not good for governance. Principles of a religion are not universally shared causing inter-religious and even intra-religious contentions, conflict and violence.

At best, the genuinely and truly religious citizens could contribute to the construction of a saner society imbued with humanism — love, compassion, fellowship, piousness and so on, these are the principles that underpin most religions. Furthermore, many in India, even in the ruling dispensation, talk about reclaiming Akhand Bharat (the Undivided India). They perhaps mean India, Pakistan, and Bangladesh. Those subscribing to the concept of Bharata Varsha call India, Pakistan, Afghanistan, Bangladesh, Nepal, Bhutan, Tibet, Sri Lanka and Burma are one nation. They had all embraced Sanatan Dharma. However, that is another story.

In the context of Vijay Diwas, in current times, we need to celebrate it in a different way. The prominent hero of the Second World War, Winston Churchill had said, “In War: Resolution, In Defeat: Defiance, In Victory: Magnanimity, In Peace: Good Will.” We recall the atrocities not to repeat them, we recall the sacrifice to honour them in gratefulness. We take the last words of Churchill, that is peace. We are in peace times, as a full-scale war is ruled out between nuclear countries.  Therefore, we promote good will, vow not to nurture hatred or hubris, seek security, unity and development.

Vijay Diwas today should mean victory of over hatred and hubris. Sounds moralistic, not pragmatic! But that is the way to go. To be sure, our Prime Minister, who is known to conceive so many new ideas to the world, could come up with such a frame of new thinking in our foreign policy towards our neighbours and defeat the designs of the vested interest meddling in our neighbourhoo

Cryptocurrencies likely to be treated as commodities, may face taxation: Report