Vijay Diwas 2021: The Day When India Won The 1971 War Against Pakistan 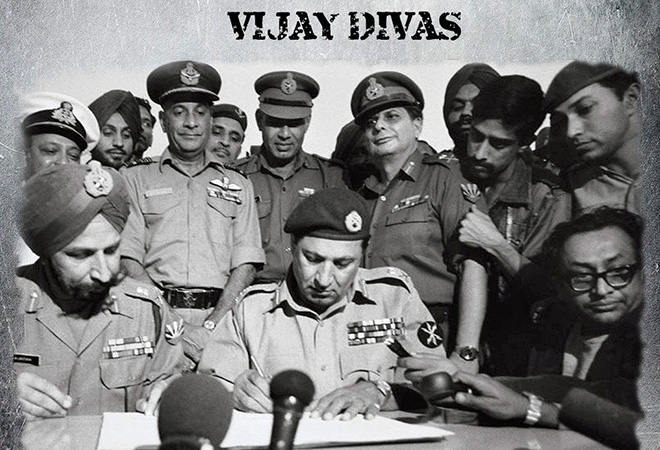 This year marks the 50th anniversary of India’s victory over Pakistan in the 1971 war, which saw the creation of Bangladesh. India declared victory over Pakistan on December 16, 1971, after the Pakistani armed forces surrendered. Since then, this day has been commemorated as Vijay Diwas to remember the sacrifices of defence forces.

The 1971 war not only liberated Bangladesh, but it also dealt Pakistan a crushing blow. The signing of the ‘Instrument Of Surrender’ by Pakistan Army Major-General Amir Abdullah Khan Niazi to the Indian Army and Bangladesh’s Mukti Bahini was a defining image that cemented India’s leadership in the subcontinent. Major-General Niazi surrendered with his 93,000 troops before Lt General Jagjit Singh Aurora, then General Officer Commanding-in-Chief of India’s Eastern Command. This was the largest military surrender since World War II.

The 1971 war was a result of the Pakistan military’s ill-treatment of the Bengali-speaking majority in East Pakistan. Following the electoral triumph of the East Pakistan-based Awami League, led by Sheikh Mujibur Rahman, in the 1970 elections, the Pakistani military used force to try to sway the outcome. This resulted in a mass outflow of people from Bangladesh, forcing India to intervene

In a tweet on Thursday, Prime Minister Narendra Modi wrote, “On the 50th Vijay Diwas, I recall the great valour and sacrifice by the Muktijoddhas, Biranganas and bravehearts of the Indian Armed Forces. Together, we fought and defeated oppressive forces. Rashtrapati Ji’s presence in Dhaka is of special significance to every Indian.”