‘We are happy to fight you’: tensions rise on Afghan-Pakistani border 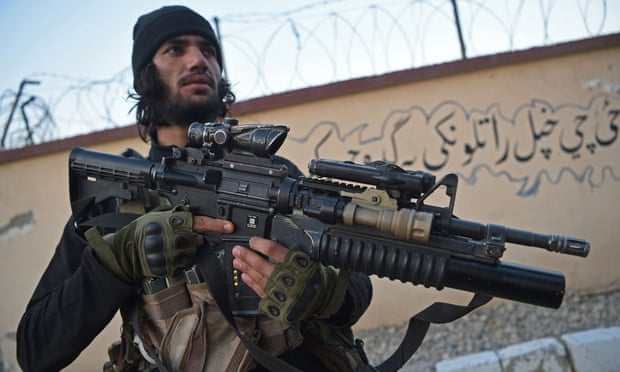 The Pakistani-Afghan border, running along Britain’s colonial-era Durand Line, is a centre of the increasing tensions between Islamabad and the Taliban, with a rise in attacks since the group came to power in Kabul.

Five Pakistani soldiers were killed on Sunday at a north-western border post in Khurram district by militants inside Afghanistan in an attack claimed by the Pakistani Taliban, Tehreek-e-Taliban-Pakistan (TTP).

After a ceasefire between the group and the Pakistani government collapsed within weeks, the Pakistani foreign minister, Shah Mahmood Qureshi, said Islamabad had told the Afghan Taliban leadership it considered TTP as a test case of its ability to control militants.

“If the Taliban can’t address concerns of Pakistan, then who would trust them and their promise of cutting ties to al-Qaida and other such groups?” he asked.

Pakistan previously clashed with the US-backed Afghan government over the border – which Afghanistan has never formally accepted – leaving many soldiers dead, so when the Taliban captured Kabul in summer 2021 it was celebrated in Pakistan by the prime minister, Islamist political parties and retired military officers.

The Taliban’s return to power was seen as an opportunity for Pakistan to regain influence and also as a strategic victory over Delhi.

The author and analyst Zahid Hussain, however, said the Afghan Taliban would not crack down on TTP bases in Nangarhar province, east of Kabul.

“In the beginning, Pakistani authorities believed the Taliban would serve Pakistan’s interests and [not] allow militants to use its soil against Pakistan. But it does not seem to be the case any more,” he said, adding that the extremists were emboldened by the Taliban’s victory in Afghanistan and aspired to do the same in Pakistan.

Pakistan started fencing the porous border in 2014 to contain cross-border terrorist attacks and smuggling. It says it has fenced more than 90% of the border, but Hussain said militants were able to enter Pakistan and carry out attacks where the border remained unchecked and unfenced.

In at least three separate incidents, Talib fighters have been seen breaking the fencing and threatening Pakistani soldiers in border areas.

In one widely shared video from 19 December, a Talib commander in Nangarhar is heard saying to Pakistani soldiers: “If you come a step further, I will fight you here. We are happy to fight you.” A similar incident was recorded last year on 30 December in Nimruz, a province in south-west Afghanistan.

The Taliban’s defence ministry spokesperson said in a video posted to Twitter in January that Pakistan had no right to fence the border and divide ethnic Pashtuns living on either side.

Amid mounting clashes and tensions on the border, Pakistan’s national security adviser, Moeed Yusuf, visited Afghanistan for two days on 29 January. Both countries announced plans to form a high-level committee to address the issue.

Drawn by the British empire, the 2,640km (1,640-mile) land border between Afghanistan and Pakistan has been perpetually disputed.

Abubakar Siddique, an author and expert on Pakistan and Afghanistan, said that after the Taliban – an Islamist group – seized power, many in Pakistan thought they would not behave as an Afghan nationalist group. He said people were wrong to make such an assumption.

“The anti-Pakistan sentiments are high in Afghanistan because of Islamabad’s perceived role as a main driver of instability. In addition, no Afghan government has ever formally accepted the Durand Line as a permanent border, which remains a highly emotional issue,” he said.

“Their actions along the Durand Line aim at gaining domestic legitimacy. The Taliban also want to do away with the almost universal perception that they are a Pakistani proxy group.”

The Taliban are not only seeking domestic legitimacy amid a humanitarian crisis – a more porous border benefits their financial interests.

A Pakistani government official posted on the Afghan border anonymously told the Guardian that “as many of the areas have been fenced, we have seen a decrease in human and drug smuggling. Of course, the Taliban benefit from these illegal businesses and now the smugglers use different routes where there is no fencing.”