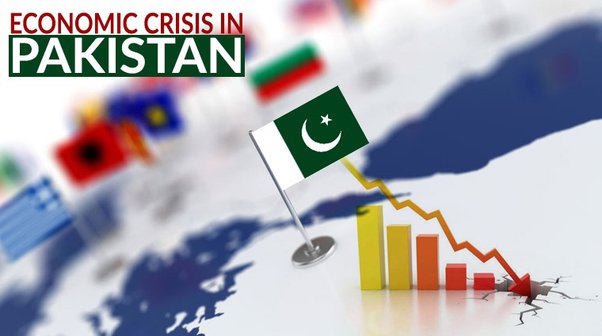 The present economic condition in Pakistan is extremely fragile and it may collapse anytime soon if no immediate measures are taken. But what led to the current economic downfall was mainly the lack of any viable economic plan by the PTI government that could take off. PTI ruled Pakistan for more than three years and in that tenure the economy nosedived with indicators like double-digit inflation, trade deficit, & high-debt of the country, adding a surge in the economic miseries.

According to Senator Saleem Mandviwalla, there was a 50% devaluation of Pakistan Rupee in the three-year rule of PTI government. This devaluation caused a massive wave of inflation to create chaos in the lives of people in Pakistan. The import of edible oil, wheat sugar, pulses, and other food items triggered an unrest among the masses.

The country’s expenditures have increased to Rs7.5 trillion from Rs4.2 trillion with a rise in mark-up payment of Rs 3,000 billion due to the re-profiling of government debt by the PTI government. The external debts and liabilities increased from $95 billion to $127 billion adding massive troubles to the country and more debts than any of the previous governments.

The poor performance by PTI that aided in the rise of inflation rate by 10% was highest among the regional countries. The expenditures during the PTI government rose to Rs7.5 trillion from Rs4.2 trillion that was a massive increase. There was a high fiscal deficit of nearly 9% of the GDP for the first two years and in the third year it was 7% that resulted in a massive increase in the debt-to-GDP ratio. The tax-to-GDP ratio has increased to 9.2% from 11.2% during the first three years of Imran Khan regime.

In an interview the former Finance Minister of PTI said Economic planning took time and that caused retardation,”. Another failure of the PTI government was its inability to fix the state-owned enterprises (SOEs) — an area in which the PTI government achieved “nothing,” said Mr. Tarin. He further asserted that before assuming power the PTI did not have any economic plan to run the government successfully. Mr. Tarin also accepted the failure to develop a “trading floor” that the government could use to hedge against the upswing in the global prices of commodities, he added. Therefore, it clarifies that PTI failed to deliver anything productive and the blunder made in the name of economic policies is the reason Pakistan is struggling at the moment.