When Kashmir Was All About Love In Bollywood! 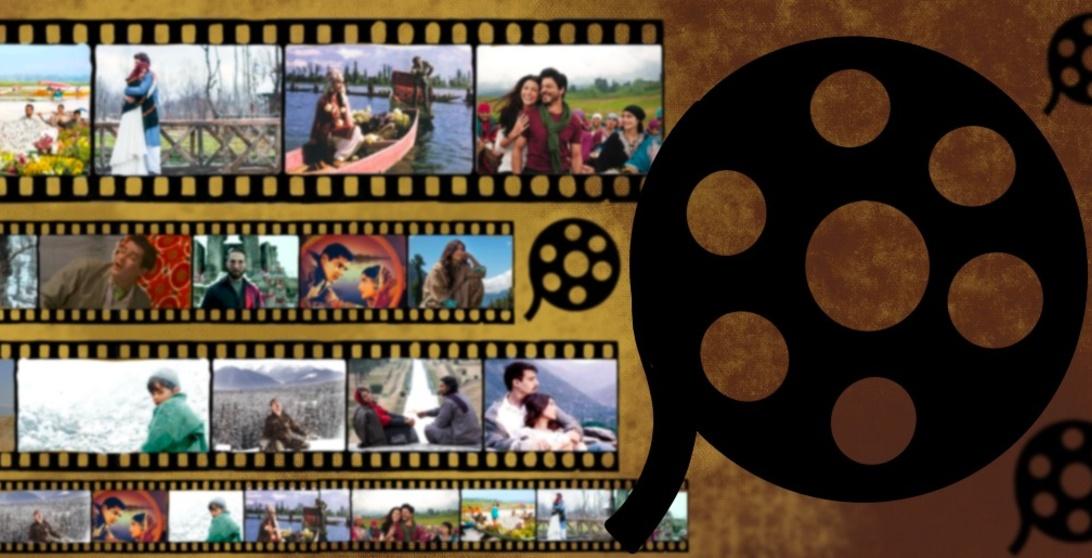 Kashmir remained a veritable paradise for Bollywood for a long time. For an average filmy Joe, Hindi cinema was incomplete without its quota of breathtaking visuals of snowfall in Gulmarg, lush-green meadows by the Lidder at Pahalgam or a song-and-dance routine on a shikara on the placid Dal Lake.

When Anand Bakshi composed this ode to Kashmir for an Amitabh Bachchan-starrer, Bemisal in 1982, he was merely expressing Bollywood’s long-overdue gratitude to the picturesque valley that had bewitched Hindi filmwallahs for generations. For decades, the northern state remained the ultimate go-to destination for any production house, howsoever big or small, operating from Bombay.

Kashmir remained a veritable paradise for Bollywood for a long time. For an average filmy Joe, Hindi cinema was incomplete without its quota of breathtaking visuals of snowfall in Gulmarg, lush-green meadows by the Lidder at Pahalgam or a song-and-dance routine on a shikara on the placid Dal Lake. For about three decades or so since the early sixties, the valley remained a permanent fixture as an idyllic locale that the Hindi cinema audiences never got tired of despite seeing it in film after film of every possible genre, from romance to comedy, action to family socials.

But romantic musicals certainly took the cake when it came to exploiting the paradise on celluloid. The sight of a macho man (you could call him sadist, too!) in Cashmere poncho serenading his shivering ladylove in a ghagra-choli (chiffon, Yash Chopra’s brainwave, came much later) in the snow-topped valley never failed to send temperatures soaring inside the seedy theatres in the faraway tropical hinterland.

At least on screen, Kashmir back then epitomised love, love, love and nothing else, thanks to all those besotted screen couples storming the valley, crooning dulcet ditties under the falling Chinar leaves, strolling across Shalimar Garden, throwing snowballs at each another with a teenager’s delight or (can you believe it, now?) even climbing the steep stairs of Sankaracharya temple in Srinagar.

Of course, we in the audience were privy to the side-effects of too much cuddling and rolling down through the snow mounds under sub-zero temperatures. More often than not, we would wait for the frost-bitten damsel in distress (entirely of her own making!) to be brought back to her senses by her chivalrous suitor through the only therapy he probably knew to provide in such emergencies: a mouth-to-mouth resuscitation. If only their travel guide had dropped a pouch of brandy in the pocket of his Angora pheran or advised the ice maiden to wrap a Pashmina shawl around her before they ventured out for their amorous adventure in such hostile weather!

But then, none of us would ever mind. It was all worth the price of a ticket for entry into a dark and damp balcony on the first floor of a rickety theatre where we would sweat profusely and endure the collective assault of the bedbugs for three hours on broken chairs. It usually happened at a godforsaken town, thousands of kilometres away from the idyllic valley, where 1,700-odd inveterate aficionados of pulpy romance would wait for those memorable matinee moments. Mind you, Love in Kashmir, not hate was what saw them through and fuelled their wildest fantasies in those halcyon days. It did not matter if that love was platonic, passionate or a hybrid of the two.

Back then, Bollywood unfailingly flew its onscreen lovers to Kashmir to lend a visually seductive charm and authenticity to the storytelling. How could they have shown love blossom in the friendly Chinchpokli neighbourhood of South Bombay? Would it not have looked so unreal in a Hindi film when the heavenly Kashmir was just a call (to a travel agent) away?

In retrospect, Hindi cinema’s romance with the Valley began with the advent of Eastmancolor reels. Shammi Kapoor’s all-colour Junglee (1961), who yelled ‘yahoo’ while hurtling down the slopes of snow-capped mountains to woo his ladylove (Saira Banu in her debut) in his own way left the audiences awestruck by providing insatiable footage of the pristine beauty of the valley.

Soon, every big star of the era headed for Kashmir to shoot their films. Many popular actors of the time such as Joy Mukherjee and Biswajeet owed their success primarily to their romantic films shot on outdoor locations in Kashmir, which invariably compensated for the wafer-thin plots around the taming of a shrew on an excursion through the valley with her besties.

The Kashmir spell continued all through the seventies during the Rajesh Khanna and Amitabh Bachchan era as well. Even the great Raj Kapoor, recovering from the box-office debacle of Mera Naam Joker (1970), shot Bobby (1973) extensively in the valley, including the popular anthem of the lovebirds, Hum tum ek kamre men band ho at a guest house, which later became a tourist spot in Kashmir just the way Lake Lungeren drew Indian travellers to Switzerland in droves after Dilwale Dulhania Le Jayenge (1995).

While the scenic beauty of Kashmir cannot be overemphasised here, there is also denying the fact that its captivating peaks and valleys offered a bonus to the erstwhile Bollywood stars who always needed an excuse to get away from the Bombay’s heat and humidity. In the era of multi-starrers in the seventies in particular, when most actors did multiple shifts in a day, innovative filmmakers hit upon the idea of flying them all to the valley for the shoots along with their families after getting their bulk dates. The perfect business-pleasure synergy proved to be a win-win situation for both sides. Subhash Ghai, for one, camped in Kashmir for a prolonged schedule with all his major stars to shoot Karma (1986) in Pahalgam and so did most of his contemporaries. It was a time when nobody had a premonition of what lay in store there.

The gradual rise in militant activities fuelled by the forces from across the border signalled the beginning of the end of Bollywood’s rendezvous with Kashmir in the late eighties. Several cinema halls were set ablaze and threat calls were given with impunity to boycott Bollywood movies by militant organisations to create an atmosphere of fear. In a few years, Kashmir turned into a troubled paradise, completely out of bounds for the film industry. Consequently, all the shoots which provided livelihood to scores of people came to an abrupt halt. It was a pity considering the unconditional love, affection and adulation that an average Kashmiri always had for the film stars. Every shikarawallah of yore would love to recount a tale or two about his encounter with a Shammi Kapoor here or a Sharmila Tagore there. There was no dearth of fascinating stories — some true, others apocryphal —  about almost every top film star of their time. The locals, both Muslims and Pandits, would fondly talk at length about how Raj Kumar (a Kashmiri Pandit named Kulbhushan Pandit in real life) would play golf for hours in Pahalgam without putting his wig on. Others would claim that Dilip Kumar, smitten by the sheer beauty of the place, had bought a house in the valley in the name of a local shepherd since the laws prevented any outsider to buy property there. Evidently, Bollywood’s love for Kashmir was not one-sided. The Kashmiris reciprocated it in more than equal measure.

Unfortunately, the trouble lasted for years in the valley forcing Bollywood to look for an alternative to Kashmir to tell its love stories. Tragically, the scourge of violence had erupted in its worst form at the outset of the very decade which saw the return of the romantic musicals amid the rise of the formidable Khan triumvirate. Kashmir would have been perfect for Bollywood in the ninties. But even veteran Yash Chopra, who had had a prolonged affair with the Valley since his Daag (1974) and Kabhi- Kabhie (1976) days turned to the peaks of Swiss Alps and tulip gardens of the Netherlands to film his romances. His director-son, Aditya also travelled across Europe to shoot his musical, Dilwale Dulhania Le Jayenge whose historical success triggered a stampede of sorts among the filmmakers to rush to various European locations. Amid continual reports about rampant killings and exodus of Kashmiri Pandits and other forms of extremist violence, Bollywood let go of its beloved paradise with a heavy heart. Today, Kashmir’s shikara owners do not have as many stories to tell about Aamir, Salman and Shah Rukh Khans as they have had about their predecessors.

Nonetheless, Kashmir was never completely obliterated from Bollywood’s memories, though it ceased to be the lovers’ paradise on the Hindi film screen. Instead, it became part of the jingoistic narratives, mostly in mindless action flicks revolving around the Pakistan-sponsored terrorism in the Valley. Dialogues such as “Tum doodh mangoge hum kheer denge, tum Kashmir mangoge hum cheer denge (We will give you pudding if you ask for milk but we will tear you apart if you ask for Kashmir)” elicited nationalistic whistles in the theatres as terrorism in the valley became a recurring theme in many movies. Ironically, most of them had to be shot in Himachal due to prolonged disturbances in the valley.

In between, a few serious attempts like Roja (1992) and Haider (2014) were made by the likes of Mani Ratnam and Vishal Bhardwaj to tackle the insurgency in the valley but seldom did Bollywood explore beyond its stereotypical narratives.

Amidst all this, however, the plight of Kashmiri Pandits was depicted only in a handful of eminently forgotten movies. Vidhu Vinod Chopra, who made a hardcore commercial Mission Kashmir (2009), came up with a valiant Shikara (2020), a love story woven around the 1990 exodus of Kashmiri pundits from the valley on its 30th anniversary. But it was hastily dismissed by the critics as “too soft on the perpetrators of the crime”. And now, here is Vivek Agnihotri’s hard-hitting The Kashmir Files, a controversial blockbuster on the tragedy of the Kashmiri Pandits, which is unlike anything Bollywood has done in or on the valley so far.

Whether the rest, as they say, is history, or a travesty of it depends on which side of the Kashmir story you want to hear and see on screen. The jury is still out!