When the Hunters Became the Hunted: The Galwan Valour 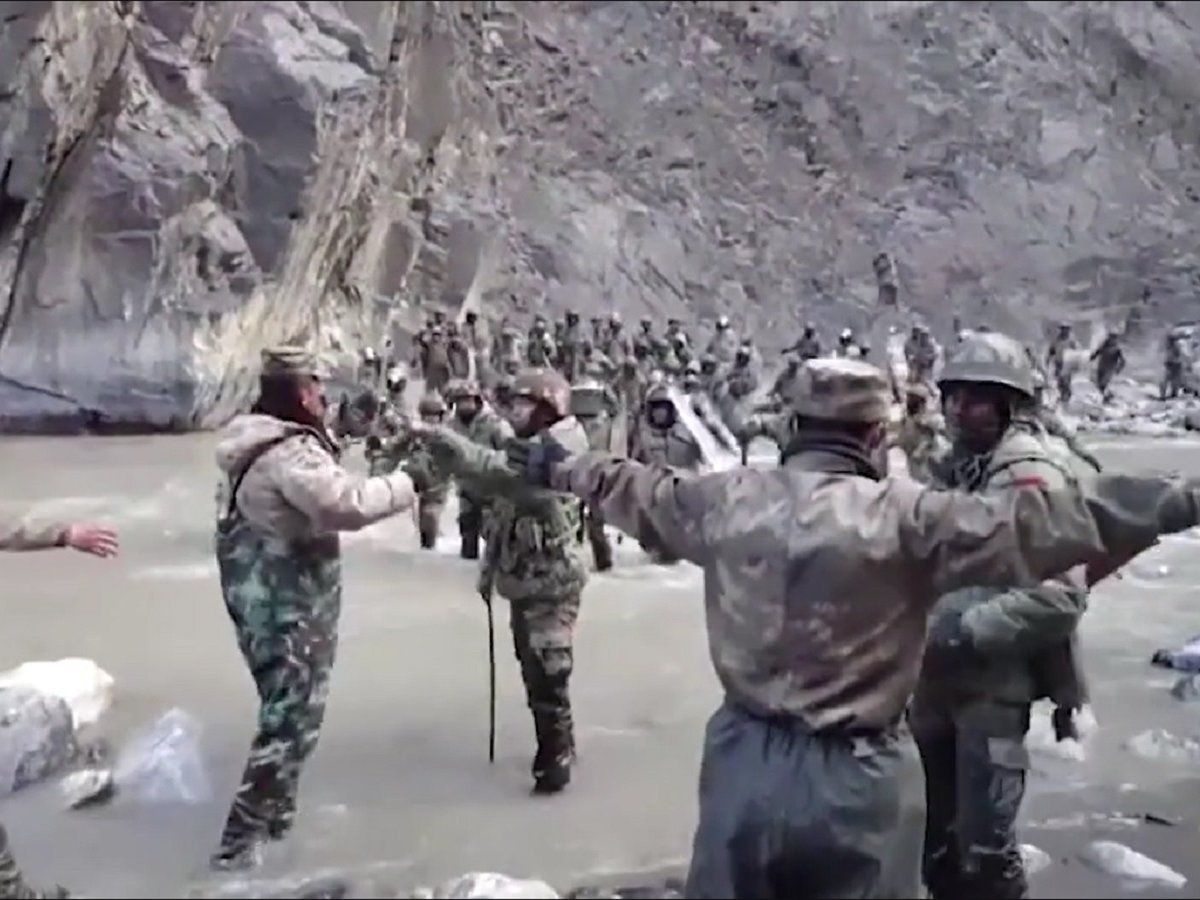 On the fateful night of 15 June 2020, the infamous Galwan Valley reverberated with 16 Bihar regiment’s war cry ‘Bajrang Bali ki Jai’ & ‘Birsa Munda Ki Jai’. The war cry had followed an extraordinary event. The Chinese treachery and disregard for Corps Commander level talks and agreement had led to the death of the Commanding Officer (CO) of 16 Bihar, Colonel B Santosh Babu.

A few days before the clash, a Chinese observation post had come upon the Indian side of the Line of Actual Control (LAC). The Chinese were made aware of this fact and as per the agreement, the Chinese dismantled the post. However, on 14 June 2020, the camp re-emerged overnight. Indians were about to witness General Zhao Zhongqi, the Commander of the Western Theatre Command’s sinister and cowardly designs.

On the eve of 15 June 2020, Colonel Babu decided to personally inspect the campsite. The Indian team of around 35 men accompanied the Commanding Officer. On reaching the area, the Indian team discovered that the Chinese troops at the campsite weren’t the regular PLA troops they had been dealing with. Right from the beginning, it was evident that the new Chinese troops were following a script. They started showing aggression, the moment the Indian team arrived. When Colonel Babu enquired about the observation post, the Chinese soldiers became abusive and one soldier pushed Colonel Babu.

Colonel Babu, sensing the bigger game at play sent the injured men back and asked for the backup. By the time additional forces arrived, it was dark. The new set of Chinese troops waiting on the banks of the Galwan river as well as on the ridges started hurling stones. As per design one such stone was aimed at Colonel Babu. He was struck on the head and he fell into the Galwan River.

The Chinese troops had come well prepared with metal spiked clubs and barbed-wire-wrapped rods. The Indian soldiers were fighting barehanded, with rocks or snatched Chinese weapons of treachery. The fighting lasted under one hour with a large number of casualties on both sides. When the forces ran out of energy, a large number of bodies of Indian and Chinese troops were floating in the Galwan river. The Indian Commanding Officer, Colonel B Santosh Babu was one among them.

Soon the Ghatak platoons from the 16 Bihar and Punjab Regiment arrived to ensure no further surprises from belligerent China. Indian troops moved across the LAC. Every Indian soldier displayed exceptional grit and courage, in the face of betrayal and belligerence.

One outstanding account of bravery and valour is about a young Ghatak commando (name withheld). He despite all odd fought bravely and killed 12 Chinese soldiers, single-handedly. When four Chinese soldiers cornered him, he pushed all four, one by one off the cliff. While pushing them down, he slipped off the cliff. His fall was arrested by a boulder, gravely injuring him. However, the fall and the injuries didn’t deter him. He pulled himself back to the fight and started fighting with the Chinese again. When he got a chance, he snatched a barbed wired stick from a Chinese soldier. Thereafter there was no stopping him. He killed seven more Chinese with their own weapon of treachery. In the melee, the brave heart was stabbed from behind by a cowardly Chinese soldier. The grievously injured Ghatak swung around killing the attacker before making the supreme sacrifice.

With mounting casualties, Chinese soldiers panicked and ran towards the safety of their unit across the Line of Actual Control (LAC). The Indian soldiers chased them for over a kilometre. However, across the LAC they were outnumbered and some of them were captured. They were among those who were released the next day. By doing so the Chinese were not being benevolent, the Indian Army had also captured several Chinese soldiers and they were released along with Indian soldiers.

The Indian troops had reportedly unleashed a reign of terror, unheard of in modern military history. The Chinese treachery was not a by chance happening. It was a well-planned attack with the blessings of the highest authorities among the CCP. General Zhao had approved the operation. He had previously expressed concerns to the political leadership that China is appearing weak in front of New Delhi and its ally United States. As per sources he had directed PLA units in the region to “teach India a lesson.” As per a Chinese source, the whole game plan was being monitored and directed by the Chinese drones.

Huge losses of Chinese lives had put leadership in a huddle. Instead of teaching India a lesson, General Zhao’s plan had failed miserably and they got a lesson in bravery and valour from Indian soldiers.

India, after assessing the situation declared that 20 Indian brave hearts, including the Commanding Officer, had made the supreme sacrifice. The Chinese side was in shock and mum about the whole incident. On 22 June 2020, the Chinese Foreign Ministry spokesman Zhao Lijian refused to divulge the number of Chinese casualties. In the subsequent press conferences, he kept playing the same broken record that he is not aware of the number of casualties. Apropos, Zhao Lijian is the same person who had given a step-by-step, detailed, one-sided Chinese version of the Galwan clash soon after the incident.

In the absence of any confirmed figure of casualties on the Chinese side, social media was abuzz with various numbers and theories. A United States intelligence assessment put the figure at 35, Russian news agency TASS put the figure at 45, Indian social media reported up to 100 Chinese casualties, citing various websites like kreately.in, and pratyaksha.com. Another Indian geopolitical website insightful.co.in put the figures at 111, which included killed and the gravely injured.

In an article in ‘The Washington Post’, Jianli Yang, the founder and president of Citizen Power Initiatives for China, wrote that “Beijing fears that admitting that it had lost troops, that too more in number than its opponent, could lead to major domestic unrest that can even put the regime of Chinese Communist Party (CCP) at stake.” Indian social media latched onto this revelation and attributed the count of 100 to the former Chinese military official and son of a leader in the CCP.

The PLA officials had their agenda cut out. To confuse India, they kept passing unofficial figures to Indian officials, ranging from 4 to 14 during the recess of various official talks. Finally, in February 2021, China divulged the number of Chinese soldiers lost in the Galwan clash, and immediately became the butt of jokes on Chinese social media. However, the declaration by China that they lost four soldiers, after a gap of eight months was a well-thought-out strategy.

In the late 50s, when China was struggling with the famine created by Mao’s ‘Great Leap Forward’. To distract Chinese citizens, propagandists created Comrade Lei Feng, a fake national hero, who was real. He was a lowly driver in the People’s Liberation Army. His diary was forged with nationalistic slogans and he was made to pose, reading party ideology under a lamp, in the studios. He was killed in a freak, falling pole accident so that the enigma of his greatness becomes everlasting.

February 2021 was once again one such occasion. The Chinese New Year was around the corner and China was going through food shortages. The shortages were so severe that Xi Jinping had to devise a ‘Clean Plate Campaign’ to deal with the crisis. The campaign was dubbed as “N-1”, a group of 10 people who can only order 9 dishes. The Chinese New Year was around the corner and CCP could not afford to have a public outrage on their plate. They desperately needed a distraction. English writer and compiler of English dictionary, Samuel Johnson had once said: “Patriotism is the last refuge of the scoundrel.” Chinese leadership made use of this slogan by raising the feelings of patriotism and nationalism. Glorified martyrs were crafter out of PLA soldiers Chen Hongjun, Xiao Siyuan, Wang Zhuoran, and Chen Xiangrong. Their colourful posters with heavily worded slogans from their purported diaries were splashed across the country. The accidentally killed men looked more like philosophers than soldiers.

However, the house of cards came crashing down when Qiu Ziming, a former investigative journalist questioned the number of dead PLA soldiers on Twitter equivalent Weibo. He has 2.5 million followers and this exposé went viral, sending shockwaves through the ranks of CCP. In true communist style, Qiu and five others become the first few citizens to be prosecuted and sentenced under a new law that prohibited the defamation of Chinese heroes and martyrs. As per Qiu, the four dead soldiers were never part of the initial fight at the LAC. They had gone to retrieve the dead bodies and got killed. Therefore, he questioned the authorities that if these soldiers had gone to retrieve the dead bodies and got killed then how are the numbers restricted to four.

Qiu’s exposé once again confirmed Colonel Babu’s assessment that the troops at LAC on the night of 15 June 2020 were not the regular troops. Declaration of these soldiers’ death would have exposed the Chinese game plan. This would have impacted the sentiments of already demoralized serving PLA soldiers. Xi Jinping and CCP are not that much scared of the United States or the Chinese citizens, as much they are of a PLA coup or internal unrest. If PLA generals hurt by Xi’s cessation of their commercial activities, bruised PLA soldiers unhappy with Chinese misadventures, and the millions of disgruntled veterans who feel that they are ‘donkeys who to be slaughtered after they are too old to work a grindstone’, join hands, they would be a formidable force to stop.

In the ‘Journal of Third Military Medical University’, China’s most esteemed military psychologists Feng Zhengzhi, and Liu Xiao, bring out the fact that 29.7 percent of PLA soldiers have various kinds of adverse psychological conditions. How can a force dealing with such high numbers of psychological conditions fight future wars? No wonder some sources have confirmed that many survivors of the Galwan clash are seeking psychological treatment. And some soldiers have confessed that they can still hear 16 Bihar’s war cry and chasing steps when they try to sleep.