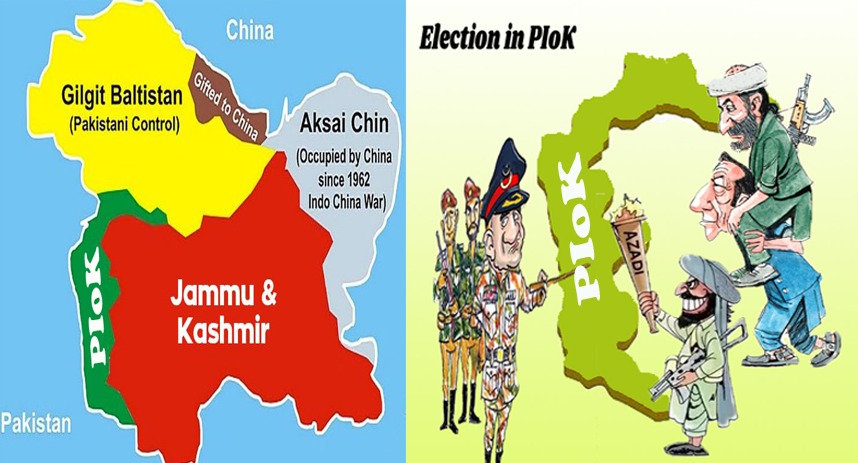 Pakistan illegal occupied Kashmir (PIoK) so-called “Azad Kashmir” by my loving neighbor Pakistan is one of the regions whose unorthodox name only narrates its story as you will never find any town, city, province, a country with a prefix of “Azad”. Even after doing brainstorming I could not understand the meaning and significance of Azad in PIoK “Azad Kashmir”, as the area itself is in illegal occupation of Pakistan and still holds the mystery of being called “Azad” that too when cruelty, traumatized, suffocation, poverty, abduction, innocent killing, and injustice are the daily normal of the area.

The Area of Conflict

The Conflict area of Jammu and Kashmir has been under the control of three countries.

India: The custodian of full Jammu and Kashmir which also includes the portion under illegal occupancy by Pakistan and China.

China: Aksai Chin and Shaksgam valley are the region occupied/ceded to China by the illegal holder Pakistan for personal gains.

PIoK “Azad Kashmir” has its own Legislative Assembly (including Prime Minister & President), Supreme Court, and High Court which sounds noble and shows signs of any progressing province. But brutal reality is that the  Prime Minister, President, and Judicial system of PIoK “Azad Kashmir” are chained puppets in the hands of Pakistan government and Pakistan army where its awam is facing brunt every day and every minute.

The 2021 General Elections of PIoK Jammu and Kashmir is being held in 33 constituencies of so-called Azad Kashmir and 12 constituencies of the refugees of Jammu and Kashmir. Pakistan Muslim League (N), Pakistan Tehreek-e-Insaf, People’s Party Pakistan, and Jamiat Ulema-e-Islam will be fighting for these 45 seats to form an illegal government and will align themself to get direction by higher commander in Lahore However, the result in a way is already out as Imran Khan has already made a begging request to General Bajwa to get the result in favor of his ruling party. The Combo of Imran Khan and Bajwa is proving to be most acidic, destructive, and harmful than anything seen in the past.

The Stand of Indian Government and Development Stats

The Government of India firmly rejects the attempt by Pakistan to bring material changes to a part of Indian territory, under its illegal and forcible occupation. The Union Territories of Jammu and Kashmir and Ladakh, including the area of so-called “Azad Kashmir ”, are an integral part of India by virtue of the legal, complete and irrevocable accession of Jammu and Kashmir to the Union of India in 1947 and the Indian government condemns the conduct of election in Azad Kasmir.

The Government of Pakistan has no locus standi on territories illegally and forcibly occupied by it. Such attempts by Pakistan, intended to camouflage its illegal occupation, cannot hide the grave human rights violations, exploitation, and denial of freedom for over seven decades to the people residing in these Pakistan occupied territories. Instead of seeking to alter the status of these Indian territories, we call upon Pakistan to immediately vacate all areas under its illegal occupation.

There are more number of hospitals on the Indian side including reputed ones like AIIMS as compared to POK.

Indian Kashmir has modern trains and good roads while PoK has average means of transport and no train service. The 10.9 km long tunnel on the Jammu-Srinagar highway is one of its kind. No such tunnels exist in Pak Occupied Kashmir. The tunnel will save fuel worth nearly Rs 100 crores a year and reduces the travel time between the two-state capitals of Jammu and Srinagar by more than two hours.

Indian Kashmir has a steady supply of power but PoK has no steady source of power and hospitals etc are totally left on their own. India does not suppress press freedom in Kashmir even if they have people who show Pak flags and IS flags but journalism in PoK is a fatal job. Not much news comes out of that area ever.

Common sense says that when there is stability in one area, development automatically comes in. When terrorists (in the guise of Pak army which controls complete Pakistan) rule the PIoK, it is obvious what grows there are just guns. It is definite that Pakistan Army and controlled government functionaries shall rig the Azad Kashmir elections, to bring out a result that both the Pakistani military and the Chinese desire to continue to implement their corruption and colonization respectively.

Come to J&K and the situation is completely different. There is a well-established voting system, a defense setup, protection of natural resources, and a strong mandate in favor of democracy. Indian Kashmir is certainly far more developed than Pak illegal Occupied Kashmir where there have not even been free and fair elections till date.