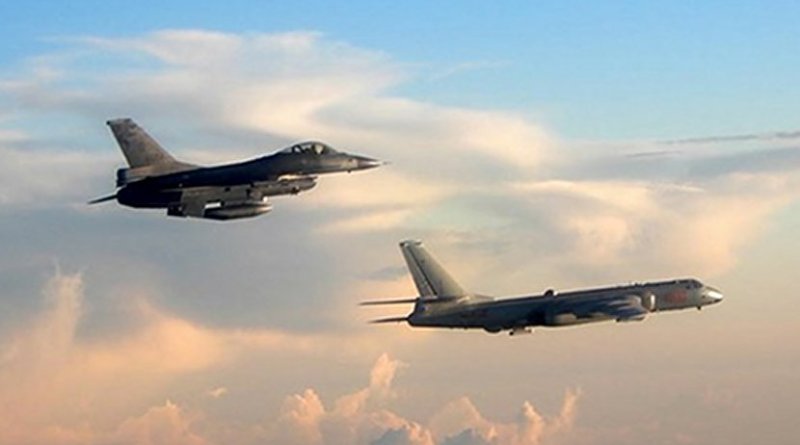 University student Feng Hao of Taiwan and his parents worry increasingly of an attack from mainland China, just 60 kilometers from their island. The number of Chinese military planes flown through a corner of Taiwan’s air defense identification zone surged to 125 in the first days of October.

His parents imagine that in their lifespan, they will see “the Chinese PLA stepping onto Taiwanese soil,” said Feng, 21 in New Taipei City. If that happens, he said, they want him to “seek asylum” in a safe place, possibly a European country.

“A lot of people said Taiwan is safe, but for me I feel like internationally it does not make me feel safe, because it’s like under pressure, and the People’s Liberation Army is trying to seek its way to Taiwan,” Feng said.

China claims sovereignty over self-ruled Taiwan and has not ruled out use of force if needed to capture it. The recent flights take place over a sea more than 100 kilometers west of Taiwan in a corner of its air defense zone that’s also near the Chinese south coast.

Analysts say the People’s Liberation Army Air Force under Chinese leader Xi Jinping probably increased the aircraft count this month to look strong at home while warning Taiwan and its Western allies not to underestimate Beijing’s firepower.“Right now, they are just doing the pre-invasion exercise and getting the formation they need,” said Shane Lee, a retired political science professor from Chang Jung Christian University in Taiwan.

“I don’t think (an invasion) necessarily comes, but Xi Jinping will have to do something to relieve some of the domestic tensions, like the blackouts,” Lee said, referring to a spate of scheduled, nationwide power outages aimed at easing an electricity shortage. “The tension is increasing in China.”

China has stepped up the number of fighters, bombers and other planes flown through the same corner of Taiwan’s air space since mid-2020 as Taiwan gets closer diplomatically to the United States, a rival to China. The number per day normally comes in under 10.

On October 4, the Ministry of National Defense in Taiwan logged 52 flights including 34 J-10 multi-role strike fighters. China’s military said on its website on Sept. 30 that its air force is developing weapons, including the J-10, in a “sustained, healthy and orderly manner toward the goal of building a world-class strategic air force that’s fully capable of protecting national sovereignty, security and development interests.”

Increased flight numbers this month coincided with China’s National Day, an occasion when the Beijing government stresses its achievements.

The surge in planes is “not a coincidence”, said Chen Yi-fan, assistant professor of diplomacy and international relations at Tamkang University in Taiwan. He said the Chinese military had long planned for the October 1 holiday to show “muscles” and highlight improvements in pilot training for nighttime missions.

The government has claimed sovereignty over Taiwan since the Chinese civil war of the 1940s, when the Nationalist Party that once ruled all of China lost to the Communists and rebased in Taipei. Today’s Taiwan government, backed by public opinion surveys since 2019, opposes China’s goal of unifying the two sides, which have not met for talks since 2016.

“The scare tactics of the Chinese Communist authorities not only hit at Taiwan-China relations, but more so wreck regional peace and stability,” Taiwan’s ruling Democratic Progressive Party said in a statement Monday. “The party strongly protests and demands that this kind of irresponsible provocation stop right away.”

Chinese officials further worry about Washington’s military support for Taiwan, analysts say. The United States has the world’s most powerful armed forces, with China ranked third, according to the database GlobalFirePower.com.

The U.S. government sells arms to Taiwan and periodically sends warships to nearby waters in its defense. U.S. Secretary of State Antony Blinken called the Chinese aircraft activity “destabilizing” with “the potential to undermine regional peace and stability.”

Aircraft carriers the USS Ronald Reagan, the USS Carl Vinson and their British peer HMS Queen Elizabeth met Saturday in the seas east of Taiwan for joint training. Previous U.S. military movements in Asian seas have prompted China to follow up with its own.

Despite media reports that suggest the planes are flying over or near Taiwanese land, the Chinese flybys do not signal a coming war, said Shelley Rigger, a Taiwan expert and political scientist at Davidson College in North Carolina. The chief risk, she added, is an accident between the Chinese aircraft and any Taiwanese planes sent to expel them.

Taiwan’s military gauges its response based on the exact movement of Chinese planes, a defense ministry source told VOA this week.

But the psychological effects are deepening among Taiwan residents, since they do not know what to expect next from China, said Chen.

“Ordinary Taiwanese people feel paralysis and don’t know where exactly the PLA fighters are heading to,” he said. “People are afraid of war but helpless under current cross-Strait circumstances.”