Why dead bodies protest in Balochistan? 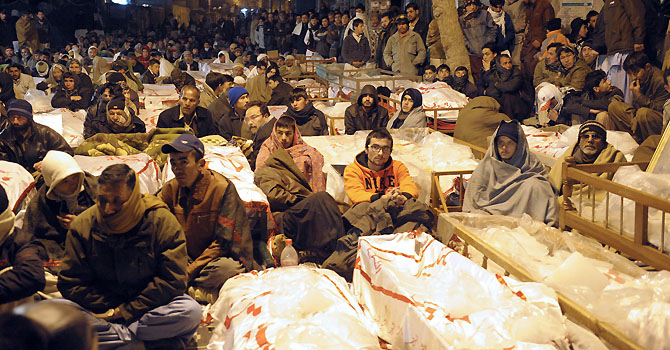 The last time Mehrab Khan buried a child was in December 2020 when his 8-year-old relative Hamza Umer was killed by army helicopter shelling on the century-old mud house shrine of Hajiabad in Keelkor. Mehrab Khan’s 30-year-old son was also among those killed. He did not expect to receive the dead bodies of another two children from his family within a year.

Mehrab Khan recalls, “10 people from our extended family have been killed since 2014. Every time one is killed, you sink further into pain but hope that it would be the last one.”

The 70-year-old man gave the reason for his recent sit-in near the Governor’s House in Quetta along with the bodies of his grandchildren. “With the murder of these two children the count has risen to a dozen and the hopes for an end to the killings has faded. That’s why I am sitting with these dead bodies here on the street”.

The old man had previously protested for several days in Turbat. Neither the Pakistani media channels nor the international press covered the protest there. Then Mehrab Khan brought the dead bodies to Quetta, capital city of Balochistan, in what he said was his “search for justice”. But even travelling more than 800 kilometres to Quetta could neither attract the media’s attention nor of those that rule Pakistan.

Part of the problem lies in the fact that the killer was noone other than the Frontier Corps (FC), a paramilitary force of the Pakistani army in Balochistan. Mehrab Khan blames the FC of firing a mortar on the children.

For two decades now, Balochistan has been run by the FC, which is considered above the law and enjoys complete impunity. No one can either oppose or stop the military’s actions in the province. In these two decades, the military and paramilitary forces have killed thousands of people in every corner of Balochistan, including women and children, while thousands have been forcibly disappeared.

The Frontier Corps has had policing authorities in Balochistan since 2004. It has been using excessive force to counter a nationalist insurgency, but its actions have mostly been counterproductive and have increased the violence in the region. However, more recently personnel of the Frontier Corps have been particularly targetting women and children.

Mehrab Khan´s grandchildren, seven-year-old Sharatoon and five-year-old Allah Bakhsh, were killed while another child was wounded. According to the details from the neighbors, the kids were playing in the backyard of their house when a mortar fired by the FC landed near them. The girl died on the spot while her brother passed away later in the hospital. Another child, Miskan Wazir, is injured and still under treatment.

But according to Mehrab Khan, this story is not new. His ordeal began in 2014, when seven military helicopters bombarded and burnt down their house in Hajiabad area of Keelkore. Two of their children were killed and three members of the family were injured. One of the injured children lost his leg and is handicapped now. The recurrent operations forced the family to leave their homes and migrate to Murad Bakhsh village.

On 20 December 2020, the forces again attacked their new settlements in Murad Bakhsh village. This time the forces burned down their house (huts) and killed seven members of the family, Abdul Samad Bahram, Hasil Haider, Saeed Mehrab, Abdul Wahid Musa, Abdul Qadir Bakhsh and Murad Muhammad Miskaan. (Murad Muhammed Miskan was the uncle of Miskan Wazir, the child who is injured due to the recent Hoshap mortar attack.)

The family was once again forced to leave the village and settle in Hoshap near to the FC camp. The FC has a habit of forcibly resettling village populations considered subversive near to their camps. Mehrab Khan hoped that the killings would stop once they would be under constant FC surveillance.

“But peace and justice were hard to come for the villagers,” says Mehrab Khan.

“As the authorities failed to serve justice to the previous nine victims of my family, now I refuse to bury these dead bodies until their perpetrators are brought to justice”. A defiant Mehrab Khan had said when he was still protesting in Turbat.

However, the authorities in Turbat denied to lodge an FIR against the mighty FC. Instead of bringing the perpetrators to justice, the District Commissioner sought to distort facts and justify the false claims of the FC saying that the kids were killed while playing with a hand grenade.

The statements compelled the family to take the bodies to Quetta. They were stopped by the FC near a check-post in Hoshap and were commanded to bury the bodies or face the wrath of the military. When the family refused, they were offered an amount of two million Pakistani rupees in return for burying the bodies. The family refused the offer too and kept demanding justice.

After 13 hours at the check post, they were finally allowed to travel to Quetta.

A large number of human rights activists from Quetta welcomed them. This was the second time in two weeks that they had received the body of a child from Turbat. Another child, Ramiz Khalil, had been killed by the counter-terrorism branch of the police in Buleda area of district Kech two weeks earlier and his father had been arrested for resisting the raid on their house. The family of Ramiz took the body to Quetta and protested for days until the father of the deceased, Khalil, was released.

The bodies of Mehrab Khan´s two grandchildren invoked massive protests across the province. Hundreds of people joined the sit-in. After six days, the family gave the provincial authorities a deadline of 24 hours to meet their demand of justice, or they would march towards the capital of the country, Islamabad.

Ultimately, the Balochistan High Court ordered the suspension of the Deputy Commissioner and the Assistant Commissioner of district Kech and the Tehsildar of Hoshap, while also ordering a full inquiry of the incident. The court also declared the two dead children as martyrs and took up the responsibility of the third injured child including the expenses of his treatment.

As the court decision was welcomed by many, the question still remains; will the FC be made to respect the law? Will FC soldiers stop further killings and forced disappearances of the people?

The situation hardly improves, and Turbat and Quetta wait for the arrival of the next batch of protesting dead bodies. The people seem to have learnt that they should no longer bury the dead in silence, and that they should demand for justice and accountability.

Mehrab Khan is back in Hoshap after burying his grandchildren. He does not expect things would take a better turn.

“The Balochistan High Court has not summoned the FC for its crimes. No FC official has been arrested. We have nowhere to go. We are the wretched,” he says.