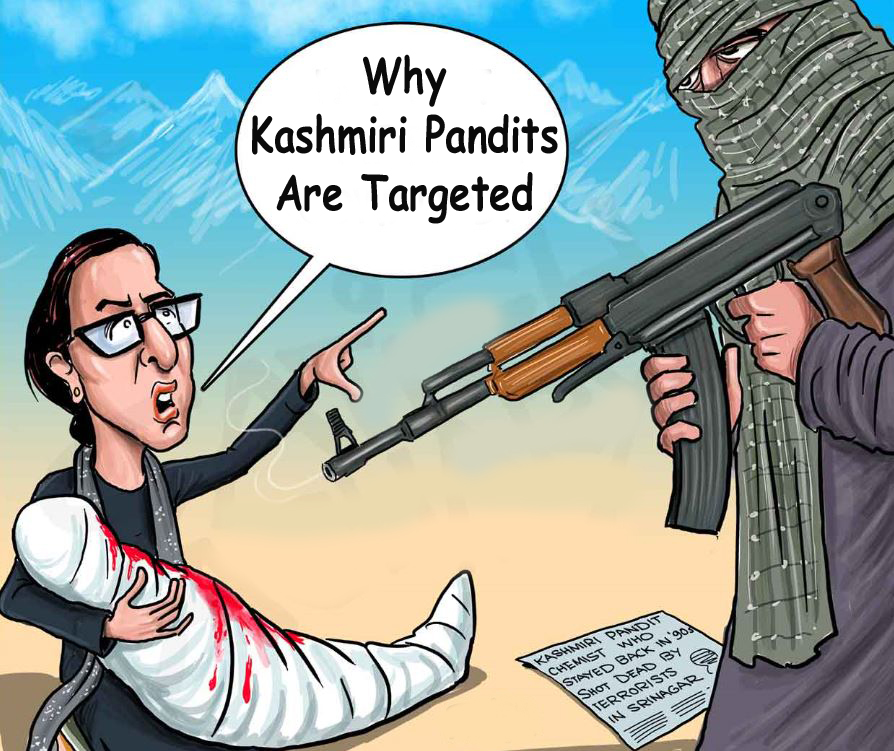 The targeted killings of Pandits are not of recent origin. In fact, the current phase of militancy and mayhem began with targeted killings of Pandits, some 33 years ago. Also, every time target killings became a phenomenon, it enveloped both Pandits and local Muslims as well, as well as some non-valley-born Hindus. So, to ignore that aspect of the data will naturally lead one to a superficial analysis, which is usually how official explanations are offered, in sound bites that are convenient to hear, but almost always are generalizations that obfuscate the truth.

The recent tragedy of targeted killings in Kashmir, since the mid-80s, can be expressed in four (4) phases. The first phase was designed, bank-rolled, resourced and directed by Pakistan. The local executioners belonged to the terrorist organization Kashmir Liberation Front (KLF) which subsequently took the name of Jammu and Kashmir Liberation Front (JKLF), and later by another terrorist organization called the Hizbul Mujahideen (HM), with JKLF playing a secondary role. Pakistani Inter-Service Intelligence (ISI) handlers selected targets (both Pandits and non-Pandits) and either Pakistani or foreign origin terrorists, or local JKLF/HM terrorists killed them. This phase lasted more or less until 1996 when the State reverted back to the legislative rule.

After the 1996 State elections, the local administration returned to the premier Kashmiri political party, the Jammu and Kashmir National Conference (JKNC). In order to give some semblance of apparent order and civility, it reached out to its local (valley-based) political adversaries that were tied to Pakistani interests, namely, the All Party Hurriyat Conference (APHC) for mutual accommodation. This arrangement had the tacit approval of the Indian authorities, believing that such a compromise will bring some semblance of peace to the Valley. The ISI did not withdraw from the scene, and every now and then Pandits suffered their wrath through mass executions, in Sangrampura and Gool/Ramban (both in 1997), Wandhama (1998), Naadimarg (2003), etc. By the early 2000s, Ali Shah Geelani had emerged as the undisputed leader of the pro-Pakistan resistance movement, having marginalized his competitors and subsequently creating a new organization called the Tehreek-e-Hurriyat Jammu Kashmir (TEHJK) in 2004.

As part of the bargain with the State, Geelani recommended recruits from Jamaat-e-Islami (JeI) began to fill the valley government posts (including backfills for jobs held previously by Pandits who had since left) who owed their allegiance to Geelani and the Azadi movement. In other words, the State agreed to bypass the official merit-based selection process for filling up open government job postings during that period. The political cover for such nefarious designs was readily accommodated by all valley-based politicians and political parties. By this time the number of political parties had also mushroomed courtesy of the national security agencies with hopes of providing alternatives to the indulgent JKNC, but in due course, every politician fell in line to accept Ali Shah Geelani as their “maximum leader.” He had the authority to call anyone in the valley bureaucracy, and no one would dare challenge his orders. Within a few years, the nexus between the government bureaucracy and hardcore terrorists began to grow, claiming its first prominent victim – a journalist – in 2018, but that nexus would not be uncovered until 2021.

Geelani had many serious faults, including his role as the “final authority” who neutralized political threats with extreme prejudice in Kashmir, but he did not see valley-based Pandits (“non-migrant Pandits”) as enemy targets. In fact, I personally know of incidents where he saved the lives of Kashmiri Pandits from angry Kashmiri Muslim mobs who got trapped in the wrong places at the wrong times in the violence that was frequently prevalent between agitating Muslims and the security forces in Kashmir. Credible sources have also told me that the State Government sought and received Geelani’s blessings for the PM Relief Package on Pandits before it was announced publicly. He did not influence the package, nor did he know of its precise contents, but he agreed with the approach that Pandits should be encouraged to return back to their homes. This phase of politics more or less lasted until 5th August 2019.

The genesis of the next phase actually began before 2019 and soon after the Modi Government took over in New Delhi in May 2014. He sought a new assessment of the Kashmir situation, with different agencies giving their own assessments, but one particular agency appeared to have a better assessment of the ground situation than traditional security agencies associated with the Home Ministry and the Prime Minister’s Office (PMO). This was borne by the State election campaign in November 2014 where observers covering the polls noted that the same hooligans arrested and released previously during stone-pelting incidents were now seen in long lines patiently waiting to cast their ballots, while most public heeded the call by Mr.Geelani to boycott the elections, and stayed away fearing for their safety.

As the late Shri Arun Jaitley from the Bhartiya Janata Party (BJP) set up the time-table to fulfill constitutional modalities in the Indian Parliament to create a legal remedy of abrogating the Article 370 through tactical use of the Article 356, the new security assessment was used to plan for mitigation of likely public outcry in the valley over the removal of the Article 370 in the State. The selective incarceration of the political leaders and their tentacles in the valley in the first week of August 2019 happened without any violent incidents. Peace prevailed in the streets of the valley contrary to the dire predictions made erroneously by a few security agencies.

During the third phase, starting with the Union Territory (UT) status of Jammu-Kashmir in 1999 until the death of Ali Shah Geelani on 1st September 2021, the focus shifted to the detention and eventual release of discredited local major political leaders, the last one being Mehbooba Mufti on 13th October 2020. But this was also the period when the linkage between the anti-nationals working in the State bureaucracy and the ISI-sponsored Lashkar-e-Toiba (LeT) was firmly established. On 1st January 2021, a local Hindu goldsmith, Satpal Nischal, was a victim of targeted killing in the valley. A LeT/ISI linked local terror outfit named “The Resistance Front” (TKF) claimed responsibility for the heinous act, attributing the killing to the victim having received a Domicile Certificate.