Will Balochistan be the Next Bangladesh? 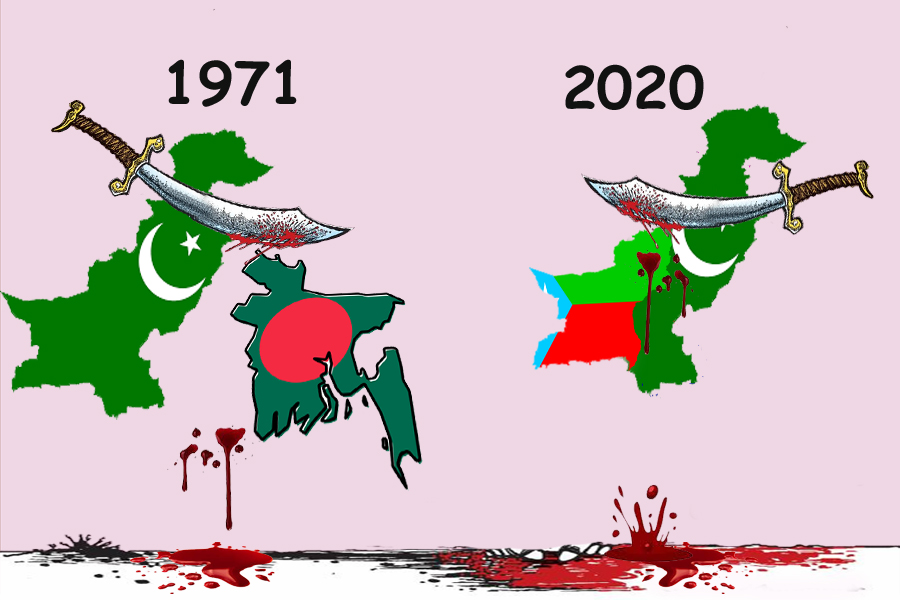 The torture in Balochistan at the hands of the Pakistan Army may be the cause of the inevitable birth of a new nation- just like Bangladesh.

December 16 is a significant day for India. In 1971, India won the war against Pakistan that resulted in the birth of Bangladesh. On this day 49 years ago, Pakistan lost half its country, its forces in the East, and had to publicly surrender to India. It was also the largest military surrender after World War II. General AAK Niazi signed the Instrument of Surrender on 16 December 1971 in Dhaka, marking the formation of East Pakistan as the new nation of Bangladesh.

The conflict was a result of the Bangladesh Liberation war, when Bangladesh (then East Pakistan) was fighting to seek freedom from (West) Pakistan. In 1971, Pakistani Army began to commit the barbaric genocide on the innocent Bengali population, particularly the minority Hindu population in East Pakistan. It is estimated that between 300,000 and 3,000,000 civilians were killed in Bangladesh. Rape, torture, killings, and conflicts followed due to which eight to ten million people fled the country to seek refuge in India.

The genocide committed in Bangladesh deserves far more attention and recognition in the museums of the world where genocides are documented in order to prevent future war crimes against humanity. But there is another nation that is crying out for help and deserves a lot more attention to prevent another catastrophe in the future.

We all know that Bangladesh gained independence and thereby a huge humanitarian catastrophe was avoided. The people of Bangladesh have always been thankful for having attained independence and having being able to retain one of the most beautiful languages of the world, Bengali, and its tremendous rich literature, which deserves to be praised and promoted. Thank heaven that there were journalists that time that did not bend to the pressure of its government and reported bravely in spite of the risk. Since then, we have seen many journalists getting abducted, threatened, and killed in Pakistan. Will we ever see a similar report written on the human rights violations happening in Balochistan as the one we saw in 1971? Would the world community react to the atrocities committed on the people of Balochistan, who live in a territory which was forcefully annexed in 1947? Probably not.

Even though Balochistan is rich in natural resources like gas, it has been historically subjugated and suppressed by the Punjabi elite, who also control the army.

This is Pakistan’s dirty little war. While foreign attention is focused on the Taliban, a deadly secondary conflict is bubbling in Balochistan, a sprawling, mineral-rich province along the western borders with Afghanistan and Iran. On one side is a scrappy coalition of guerrillas fighting for independence from Pakistan; on the other is a powerful army that seeks to quash their insurgency with maximum prejudice.

Extrajudicial abductions and enforced disappearances by shadowy military agencies have been a feature of life in Pakistan for two decades. Those suspected of having ties to terrorists, insurgents or activists are picked up and taken to secret detention centres, without trial or official judicial process. Here they face days, months, or even years of torture. Some are eventually released, but most are never seen again. “Disappearing” is nothing new in Pakistan, justified by the military as an essential tool of national security in a country which has seen thousands die in attacks by Islamic militants and separatist insurgents.

According to Voice for Baloch Missing Persons (VBMP), a human rights organisation, more than 6,000 people are still missing from Balochistan. Since 2009, 1,400 people who were abducted by security forces have been found dead, their bodies riddled with bullets and drill holes, or bearing signs of torture and mutilation.

Human rights groups have documented how widespread and entrenched the practice has become, particularly by ISI which has been accused of operating a “state within a state” in Pakistan and is reported to employ more than 10,000 operatives, most serving army officers. Abduction targets are suspected Islamic or separatist militants but also political opponents, activists, students, politicians, human rights defenders, journalists, and lawyers, all picked up without due process and no information given to the family left behind.

The question that haunts Pakistan is why extrajudicial kidnappings and torture continue, even as the country has made the transition from the military dictatorships and coups that had defined the nation since its formation in 1947, to the democratic civilian governments in power since 2008. In opposition, Imran Khan repeatedly pledged to end the practice, but since he became prime minister in 2018, the disappearances have continued – some say escalated – while accountability seems as elusive as ever.

Pakistan military’s power and influence remain sacrosanct. In opposition, Khan was seen as deferential to the army, and the backing of the military helped him to power in 2018. Khan’s administration has still not criminalised, nor ratified the UN convention against, enforced disappearances. Though Imran Khan has spoken about the need for more development in the troubled province, Baloch activists remain sceptical, viewing these projects as yet another policy designed to strip the Baloch from their territorial sovereignty and their resources.

The United States and the majority of European countries did not back the freedom struggle of the people of Bangladesh, but they ought to support the righteous cause of independence for the people of Balochistan. It is not only in their interest, but it is in the interest of all those who want to see an end to the sectarian violence between Shias and Sunnis to stop the piling up of Sunni fundamentalist organizations right close to the border of Iran, which is primarily Shia. The western countries did not come to the rescue of the people of Bangladesh, a country which comprises one of the most moderate Muslim populations in the world. They have a chance to create another moderate Muslim country, which could act as a buffer between a Sunni Islamic state, Pakistan, and a Shia Islamic state, Iran. This could easily make South Asia a peaceful region for many, not just for the people of Balochistan.

This matter cannot be emphasized strongly enough. The human rights violations of the Balochi people, who are a distinct ethnic and linguistic group, has been one of the most under-reported stories to date and ought to be brought into the limelight just the way some daring Pakistani journalists did in 1971.

At a time when Islamabad has been urging the UN Security Council to take action over Kashmiris in the wake of the changing status of Jammu and Kashmir, it is worth mentioning that the human rights violations in Balochistan, the most volatile province in Pakistan, have already drawn concerns of the international community and other human rights watchdogs.

The birth of a new country is no doubt in the offing but the silence of the world communities on the subject is only making matters worse and delaying the inevitable….and if the international forums choose to remain silent….it’ll be at the cost of a million innocent lives.