Will Pakistan’s Military Lose Its Grip on Power? 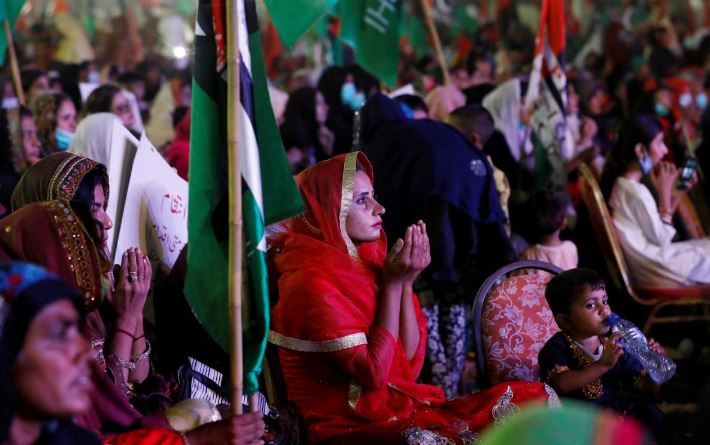 Anger Is Mounting at the Generals Behind the Throne

Pakistan’s military has long used its rivalry with India to legitimize its political and economic power and to place itself above reproach. Although it has never prevailed in a military conflict, the army has waged a successful war against democracy, ruling Pakistan directly for roughly half the country’s post-independence history and wielding undue political influence over elected civilian governments for much of the other half. The generals helped the current prime minister, Imran Khan, rise to power through a grossly manipulated parliamentary election in 2018. And now they run the country from behind the thinnest façade of civilian rule Pakistan has ever seen.

But in recent months, the military has faced a mounting political challenge. The Pakistan Democratic Movement (PDM)—an unprecedented coalition of once fractious opposition parties—has staged large rallies against Khan’s government, demanding the prime minister’s resignation. Buoyed by backing from the generals, Khan and his Pakistan Tehrik-e-Insaf party (PTI) seem unlikely to bend, but the protests have another, even bigger target: the military itself. Many Pakistanis see the army as the real power behind Khan and the cause of the country’s political and economic woes. Their anger has occasioned a remarkable shift as major political figures speak out for the first time against the military’s dominance of Pakistan—a shift that could eventually threaten the military’s chokehold on political power.

THE POWER BEHIND THE THRONE

It is not hard to see where the real power lies in Pakistan. Khan serves as prime minister, but General Qamar Javed Bajwa, the chief of army staff, calls most of the shots. He independently manages the country’s foreign relations with important allies such as China and Saudi Arabia, controls decision-making on dealings with neighboring Afghanistan and India, holds briefings for business leaders, and even makes important domestic policy decisions—such as the one to impose a nationwide lockdown to contain the COVID-19 pandemic. Retired army veterans or civilians with close ties to the military hold key positions in Khan’s cabinet, including the ministries of the interior, finance, commerce, national security, and narcotics control. Active duty military officers even head important public-sector organizations that direct public housing and disaster management.

How did it come to this? The end of the last bout of direct military rule in 2007 occasioned a meaningful transition to democratic government. A popular mobilization forced the dictatorial General Pervez Musharraf from power. And for the first time in Pakistan’s history, the elected governments of the country’s two major parties—the left-of-center Pakistan People’s Party, led by Asif Ali Zardari, and the right-of-center Pakistan Muslim League (N), led by Nawaz Sharif—completed their subsequent tenures in office. The PPP peacefully turned over power to its bitter rival the PML-N in 2013, and both parties resisted their past practice of “knocking on the garrison door”—courting the military—for political gain. No less important, the two parties worked together to pass the landmark 18th Amendment to the constitution in 2010, which restored the country’s intended federal parliamentary structure by decentralizing administrative and fiscal powers to the provinces, curtailing the expanded prerogatives of the president (which had empowered Pakistan’s head of state to arbitrarily dismiss elected governments), and restoring the prime minister’s authority to appoint military chiefs and provincial governors. No less important, the amendment modified Article 6 of the constitution, which proscribes military coups as “high treason” punishable by death, to bar the judiciary from legalizing coups as it had done in the past. These changes have afforded the provinces more of the autonomy that was traditionally denied to them by the domineering central government, deprived the military of exploiting presidential executive powers against prime ministers, and strengthened constitutional barriers against military coups.

The generals have tried to distort rather than demolish democracy

Elected civilian leaders also tried to roll back the military’s hold over national security, foreign policy, and budgetary allocations in the decade following Musharraf’s ouster. The generals responded to these challenges by seeking to distort rather than demolish democracy. Although they pretended to support civilian rule, the generals continually undermined both the PPP and the PML-N governments in various ways, including by openly defying them and threatening to topple their governments over policy disagreements. Military leaders were particularly upset with Sharif for wanting to limit the use of Islamist militants against India and for directly challenging the army’s assumed impunity by charging Musharraf with treason in 2014.

To replace the unfriendly Sharif, the generals found an ideal accomplice in Khan: a much admired cricketer untainted by allegations of personal corruption and supported by sections of the educated, urban middle classes for his populist anticorruption crusade against traditional politicians. Moreover, Khan was willing to play second fiddle to the generals and reportedly colluded with the Inter-Services Intelligence (ISI), Pakistan’s most powerful intelligence agency, to stage months-long protests in 2014 calling for Sharif’s ouster over the alleged rigging of the 2013 election that had brought him to power. The military reportedly pressured Sharif to resign but backed off after opposition parties, including the PPP, unanimously vowed in parliament to oppose any military intervention.

To prepare the ground for Khan’s ascent to power, the generals had Sharif disqualified from holding public office in 2017 through a controversial judicial inquiry linked to the Panama Papers, a global investigation into the clandestine use of bank accounts in tax havens. The ISI also fomented defections in the PML-N, and some observers alleged that troops deployed in polling stations manipulated the vote count in the 2018 parliamentary election, actions that helped Khan’s party triumph.

The military has since tried to sustain this carefully curated halfway house between democracy and dictatorship by curbing every avenue of dissent and opposition. It has put increasing pressure on civil society groups, the media, opposition parties, and even the judiciary. The most disturbing tactic in its authoritarian toolkit is enforced disappearances. In July, intelligence personnel dressed as police officers abducted Matiullah Jan, a prominent journalist known for his vocal criticism of the military, from a busy street in the center of the capital Islamabad. His captors had to release him within hours as the abduction was captured on CCTV and sparked outrage on social media. Others were less fortunate.

In recent years, the military’s intelligence agencies have forcibly disappeared regional Baloch, Pashtun, and Sindhi nationalists; human rights defenders; journalists; and professors. Reliable information is hard to obtain, but official statistics indicate that since 2009, the authorities have recovered 4,557 corpses of suspected victims of extrajudicial killing. Human rights activists say that 5,000 to 6,000 people have been forcibly disappeared since 2014, including Idrees Khattak, a 56-year-old rights activist, who went missing in November 2019 near the northwestern city of Peshawar. Following dogged efforts by his daughter and rights campaigners to secure his return, military intelligence officials admitted this past June that Khattak was in their custody. Like countless others, he remains there today.

The generals have sought to justify past coups and military rule by casting the supposed perfidy and corruption of civilian governments as a threat to national security. But a recent corruption scandal has exposed the military’s institutional hypocrisy and raised troubling questions about the extent of the rot within the higher ranks of the armed forces. An investigation by the journalist Ahmed Noorani revealed that family members of the influential former Lieutenant General Asim Bajwa—currently acting as the head of the China-Pakistan Economic Corridor (CPEC) Authority, which oversees $70 billion in Chinese-funded infrastructure projects under Beijing’s Belt and Road Initiative—own a multimillion-dollar commercial empire comprising shopping malls, residential properties, restaurants, and construction and telecom companies in Canada, Pakistan, the United Arab Emirates, and the United States. Bajwa denied the allegations, while military intelligence agents reportedly abducted a civilian official suspected of aiding Noorani’s investigation.

The army’s chokehold on the media has blunted the impact of the scandal. Officers from military intelligence agencies and the military’s media arm, the Inter-Services Public Relations, routinely decide which news stories receive top billing, which op-eds can be published, who can be interviewed on talk shows, what can be discussed on those shows, and even who gets to host them. The military has turned the country’s main anticorruption agency, the National Accountability Bureau, into a tool of political vendetta, using it to target the leaders of the PML-N and the PPP. The generals also manipulate the judiciary to convict political opponents, such as Sharif. Under duress, one judge complied with the military’s dictates to wrongfully sentence the former premier to seven years in prison in a corruption case. Those who refuse or defy the military can pay a heavy price. Qazi Faiz Isa, a judge in Pakistan’s Supreme Court, had to face an impeachment inquiry for “gross misconduct” after criticizing the military for engaging in “unlawful activities,” including censorship of the media and the distribution of cash to appease members of an extremist Islamist group that was involved in a violent standoff with the then PML-N government in 2017.

A CHALLENGE TO THE MILITARY

Recent months, however, have seen a mounting challenge to the military and to Khan. Pakistan’s otherwise fractious opposition parties formed an unprecedented united front in September under the umbrella of the PDM. Tens of thousands of opposition protesters gathered in the city of Lahore this past Sunday. In several fiery speeches from London (where he is on medical bail, with the Islamabad High Court having declared him to be “absconding” from charges in Pakistan), Sharif has turned his guns on Khan’s uniformed benefactors, naming and shaming Qamar Javed Bajwa and the ISI chief, Faiz Hameed, for ousting him from power, rigging the 2018 election, and installing Khan as their puppet. The PDM has given Khan until the end of January 2021 to resign and pave the way for fresh parliamentary elections, failing which the PDM plans to march on Islamabad in February to force the government’s hand.

The opposition’s campaign is likely to intensify in the coming months, as will the government’s attempts to dismiss and quash the protests. It is unclear whether the PDM will succeed. But there is no doubt that the military’s continued hold over Pakistani political life poses a clear threat to democratic freedoms and the rule of law. For the first time in Pakistan’s history, there is a broad agreement across the ideological spectrum of opposition parties on the need for civilian supremacy over the military. Academics, rights activists, and journalists continue to speak truth to power at great personal risk even as the military cracks down on civil society and imposes severe restrictions on free speech.

Sadly, the international community, including the United States under President Donald Trump, has largely been indifferent to the parlous state of democracy in Pakistan and failed to put pressure on the military. President-elect Joe Biden’s stated commitment to promoting democracy and human rights at least offers the hope that his administration will be less tolerant of autocratic excesses in Pakistan. As a first step, the Biden administration and other important external donors must speak out loudly against the generals’ assault on democracy and democrats. But actions speak louder than words. U.S. officials should not hesitate to threaten the use of specific policy tools, such as targeted individual travel and financial sanctions against Pakistan’s uniformed plutocrats. Signaling U.S. support for democracy and human rights is not only the right thing to do. It also serves the long-term U.S. interests in peace and stability in the region. In a truly democratic Pakistan, the military and the ISI will have less room to facilitate and export violent Islamist extremism to neighboring countries, even if such a policy shift is gradual. Continued international silence will only embolden the country’s unaccountable generals to do as they please.