Will The Taliban Stay United To Govern, Or Splinter Into Regional Fiefdoms? 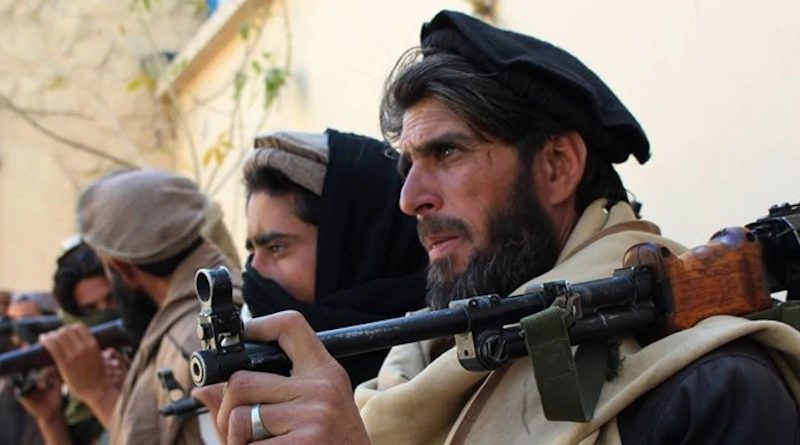 As the Taliban transforms its military chain of command into a governing structure for Afghanistan, alliances and tribal configurations that kept two rival Taliban factions together in recent years are now being tested.

“Conquering a country is always the easy part. Ruling it, in Afghanistan’s case, is the difficult bit,” says historian William Dalrymple, an expert on Pashtun tribal rivalries. “That’s when the tensions and the fault lines become apparent.”

Afghanistan security expert Ted Callahan says decisions now being made by the Taliban on a governing structure will determine whether the movement remains united or splinters into regional Taliban fiefdoms.

Callahan told RFE/RL the possible emergence of Taliban fiefdoms is a question he and many other experts are now considering.

Dalrymple notes that “splintering” is what happened to Afghanistan’s mujahedin government following the 1989 Soviet withdrawal from Afghanistan.

“The regional warlords of the mujahedin command ended up at loggerheads with each other and fighting each other in Kabul” during the early 1990s, he told RFE/RL. “It’s not impossible that this might happen now [between rival Taliban factions]. But this is a question that no one is in a position to answer right now.”

“One of the things that has surprised many Western observers is how coherent and disciplined the Taliban has been up to now,” Dalrymple told RFE/RL. “The recognized idea was that the Taliban were this fractured force and they’d splintered. But what we’ve seen in the last two months has shown an extraordinary discipline and a well-organized campaign with very little tribal dissonance.”

The result was a far-reaching realignment among Taliban factions across Afghanistan and Pakistan – particularly between hard-line groups like the Haqqani network that wanted to escalate fighting and more moderate Taliban leaders who sought accommodation with Kabul and Islamabad.

Signs of the rift were apparent in May 2014 when RFE/RL reported that the leader of the Haqqani network, Sirajuddin Haqqani, had ordered his followers not to obey the orders of the Quetta Shura.

Meanwhile, the eldest son of Mullah Omar, Mullah Mohammad Yaqoob, was seeking support from his allies in the Quetta Shura to fulfill his personal ambition of becoming the next Taliban supreme leader.

With Haqqani opposed to the idea of Mullah Yaqoob as supreme leader, it seemed the Taliban was on the verge of disintegrating.

But the rift was resolved, at least temporarily, by compromises within a new Taliban chain of command.

Three deputy leadership posts were created beneath the Taliban supreme leader but above the Quetta Shura.

Mullah Yaqoob became the deputy leader in charge of military operations in 13 provinces designated as the Taliban’s “western zone.” They include the Taliban’s traditional capital city, Kandahar.

Both Mullah Yaqoob and Haqqani have also overseen appointments of the Taliban shadow government down to the local and district level within their designated territories.

A third deputy leader’s post was created for Taliban co-founder Abdul Ghani Baradar, a member of the Quetta Shura who was released from a Pakistani jail at the United States’ request in 2018 before being placed in charge of the Taliban’s political affairs and its political office in Doha.

But many analysts doubt Baradar has much influence over local battlefield commanders and fighters in Afghanistan — the real source of power within the Taliban.

Despite the easing of tensions brought by the Taliban’s revised chain of command, signs of the rift between the Haqqani network and the Quetta Shura surfaced again after Baradar’s negotiating team signed a peace deal with the United States in Doha in February 2020.

Antonio Giustozzi, a Taliban expert with the Royal United Services Institute in London, attributed attacks in Kabul later in 2020 to the Haqqani network, saying they were being carried out without the approval of the Quetta Shura and exposing divisions between Taliban factions.

Dalrymple says those who want to understand the Taliban’s shifting dynamics in the weeks and months ahead should be looking at Afghanistan’s tribal configurations and age-old Pashtun tribal rivalries.

“All through Afghan history, the tribal allegiances have shifted like pieces in a kaleidoscope and different factions have allied with different factions,” Dalrymple tells RFE/RL. “The key thing to understand, though, is how much these alliances are based on tribal lines.”

“Unless you make the tribal calculation, you can’t understand what’s going on in Afghanistan,” Dalrymple says. “It isn’t like there are permanent tribal divisions. Alliances and oaths of allegiance can move from month to month, week to week. But the basic divisions are pretty clear.”

Dalrymple concludes that the key “fault line” relevant to what happens next with the Taliban leadership is the age-old Pashtun tribal rivalry between the Durrani and the Ghilzai clans — a rivalry that predates the Taliban by centuries.

Very broadly speaking, Dalrymple explains, the Durrani clan comprises the historical “aristocrats and the landlords” while “the Ghilzai are the nomads, the day laborers, and the dispossessed.”

“Those are the units one has to be looking at and studying” as a new Taliban governing structure begins to “develop like a polaroid photograph coming into shape in front of you,” he says.

Baradar, like many key figures in the Quetta Shura, is a member of the Durrani clan – who mostly live in southern parts of Afghanistan like the provinces of Kandahar, Helmand, and Uruzgan.

Mullah Yaqoob is from the Hotak tribe, a branch of the Ghilzai clan. But he is also from southern Afghanistan and has strong ties and allegiances with Durrani Taliban.

His supporters, including members of the Durrani clan, have argued that he should be the natural successor to become the Taliban’s supreme leader.

Fighters under his command control the region where the Taliban was created, as well as the cities of Kandahar and Herat, Helmand Province, the Spin Boldak border crossing into Pakistan, Afghanistan’s entire border with Iran, and the border with Turkmenistan.

Those fighters seized sophisticated U.S. military equipment from Afghan government forces when they captured Kandahar Airfield in the south and Shindand Airfield in Herat Province.

Sirajuddin Haqqani is from the Zadran tribe of the Ghilzai clan. Its power base is in southeastern Afghan provinces like Khost and Paktia, as well as Pakistan’s North Waziristan tribal region.

Haqqani is seen as the most powerful militant commander in Afghanistan. As head of the notorious Haqqani network, the territory now under the control of his fighters includes Kabul and the northern city of Mazar-i Sharif, in addition to key border crossings into northwestern Pakistan, Uzbekistan, and Tajikistan.

Haqqani’s fighters also seized significant amounts of U.S. weaponry from Afghan security forces — including armor and aircraft — when they captured Bagram Airfield to the north of Kabul and other military posts in northern Afghanistan.

Sanctioned by the United States as an international drug trafficker and an officially designated terrorist leader, Sirajuddin Haqqani is purported to have the Taliban’s strongest ties to both the Al-Qaeda terrorist network and Pakistan’s Inter-Services Intelligence (ISI) agency.

Security analyst Callahan concludes that, out of all Taliban factions, the activities of Haqqani and his fighters have been the most favorable for the interests of the Pakistani state.

Taliban talks on forming a new government have included meetings with some former Afghan officials and political figures — including former President Hamid Karzai, a member of the Popalzai tribe of the Durrani Pashtuns.

In a Twitter statement, Karzai said he’d urged the Taliban to form an “all inclusive” government.

The Taliban has yet to announce its broader plans to restructure for the role of governance as opposed to fighting a guerrilla war. But some details have begun to emerge.

Wahidullah Hashimi, a senior Taliban figure familiar with the decision-making process, has outlined a power structure similar to the way Afghanistan was governed from 1996 to 2001.

At that time, Supreme Leader Mullah Omar stayed in the shadows and left the daily running of the country to a ruling council.

But he suggested one key difference from Mullah Omar’s Taliban regime: He said a new post could be created that works as a kind of “president.”

Hashimi said that post should be above the ruling council and work to run the day-to-day business of government while Akhundzada issues edicts from behind the scenes.

Of the Taliban’s three current deputy leaders, Haqqani appears to be the most active in trying to position himself for a chief executive role under Akhundzada.

Since his fighters led the Taliban advance into Kabul on August 15, he has sent his uncle, Kahili-ur-Rehman Haqqani, to seek out declarations of allegiance from key Afghan political figures and tribal chieftains.

He also claims he received an allegiance pledge from Ahmad Masud, the son of the late anti-Taliban commander known as the “Lion of Panjshir,” Ahmad Shah Masud.

Masud’s aides confirm that “negotiations” with Haqqani are under way. But they insist Masud has pledged alliance to neither Haqqani nor the Taliban.

Masud and other anti-Taliban figures, including Afghan Vice President Amrullah Saleh, have formed an anti-Taliban resistance movement based in the Panjshir Valley north of Kabul – one of the few parts of Afghanistan that is not currently under Taliban control.

Zakir was born in the Kajaki district of Helmand Province and is a member of the Alizai tribe, which is part of the larger Durrani clan.

The Pajhwok news agency reports that some Taliban figures have also already been appointed to posts such as the governorship of Kabul, the head of intelligence, acting interior minister, and acting finance minister.

Whatever governing structure is finalized, and whoever is appointed to the Taliban leadership posts, Hashimi said it is certain Afghanistan will not be a democracy.

“There will be no democratic system at all because it does not have any base in our country,” Hashimi said. “We will not discuss what type of political system we should apply in Afghanistan because it is clear. It is Shari’a law and that is it.”