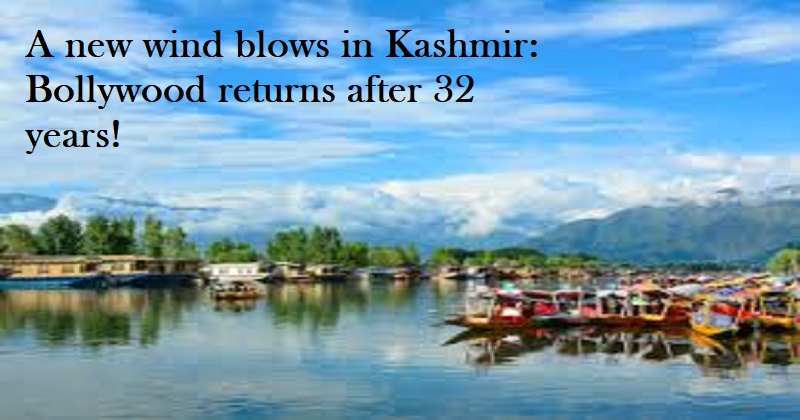 Kashmir used to be the favourite location for the Bollywood Film Industry till the 1980s before the insurgency started. And after 30 long years, the Indian Film Industry is back in the Valley. The Jammu and Kashmir government has received more than 500 applications from filmmakers across the country for granting permission to shoot in the Valley. Over 150 permissions have been granted by the Jammu Kashmir government till now.

”The film industry in the country has had a great romance with Jammu and Kashmir, most of the films in the past were shot there. It was only for a brief period that people started going out looking for locations which were as beautiful which they could not find in the country, they had to travel abroad to go and shoot. Jammu and Kashmir provides the finest locations for the film shooting and recently the LG administration took an initiative and came out with a new film policy where many incentives are being given and a single window system is being provided. We have received a great response,” said Sarmad Hafeez, Secretary of Tourism

“A number of films are being shot here, almost around 150 film units and shoots are going on. Not only from Bollywood but from south and other platforms too. This has tremendous potential and it’s going to benefit the tourism in Jammu and Kashmir. It’s a brand known all over the world. When we saw these locations in 1960 movies, I think today it is more beautiful and we have many other locations as well. We have added 75 untapped destinations which have tremendous beauty. I am sure these film people shooting here will open new avenues and greatly benefit tourism,” added Hafeez .

Under the new Film Policy, the Jammu and Kashmir government has put the permission system under Public Service Guarantee Act (PSGA). The JK administration has to give permission to filmmakers within a stipulated time of 30 days. A single window system has also been put in place to make it easier for the producers. The filmmakers can apply for permission online.

The government is also providing these filmmakers with incentives to shoot at various locations across the Valley. The local filmmakers of the Valley are happy that Kashmir is progressing, and local artists will also get a chance to work on these projects.

”Being a Kashmiri Filmmaker, I am very excited to know that 150 Films have been cleared for shooting in Kashmir. Maybe at different places like Gulmarg, Pahalgam, Sonamarg, Srinagar city and Dal Lake or anywhere.  It’s a welcome step. I am very happy and thankful to LG Manoj Sinha, who was interested in making a new film policy and keeping some benefits for the filmmakers so that more and more filmmakers come to Kashmir. It will help in so many ways like tourism etc. I would be interested if these crews hire local people for these projects. I appeal to these Filmmakers to consider the local artists as well. Kashmir is unparalleled. The filmmakers get great support from the locals. We want Kashmir to progress,” said Mushtaq Ali, Khan Local Filmmaker.

Train to Kashmir | Work on Katra end of USBRL project to be completed by December, 2022