Winter Olympics: Will the Beijing Games be ‘green and clean’? 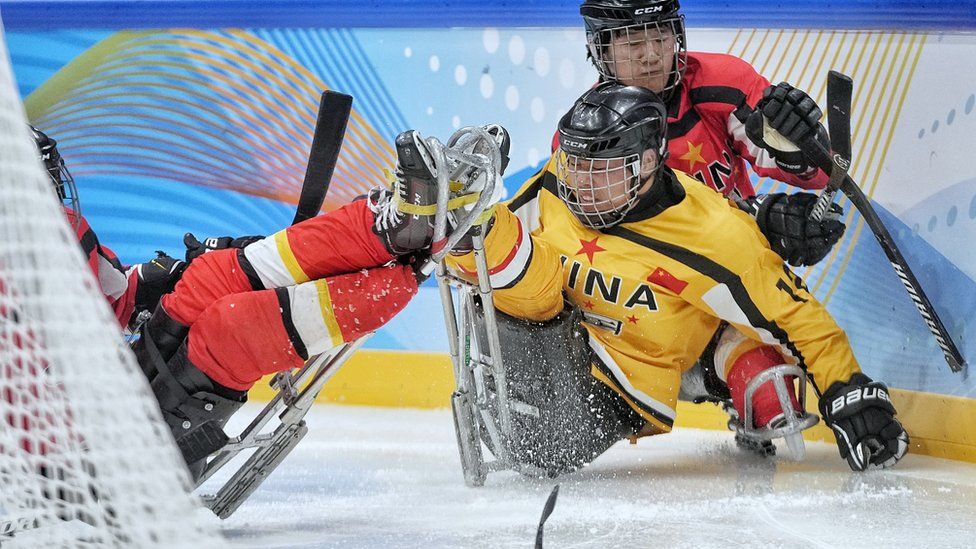 China has promised to deliver a “green and clean” Winter Olympics, which gets under way on 4 February.

But there’s been criticism that this will be the first Winter Olympics to rely entirely on artificial snow – and that some events will be held in the middle of a nature reserve.

The Olympics will be hosted across three sites, and Yanqing will host the popular Alpine ski events.

But the ski runs have been constructed in the middle of the Songshan nature reserve in Yanqing – over an area bigger than a thousand football pitches.

The construction required removing more than 20,000 trees, which was done during the last few years.

But Dr Carmen de Jong, Professor of Hydrology at the University of Strasbourg, says the removal of the topsoil in this process could significantly increase the risk of erosion and landslides, water pollution and damage to animal habitats.

“The nature reserve has lost about 25% of its surface….which has very high biodiversity and protected species such as the golden eagle.”

The BOC was alerted to the potential environmental risk in this area as early as 2015 by Chinese biologists, but the site was not moved elsewhere.

The journal Nature reported at the time that posts on the issue on Chinese social media site Weibo were removed.

When we asked the Beijing Organising Committee about this, they told us: “Beijing 2022 has done its best to protect ecosystems in the competition zones.”

Beijing has promised that all competition venues will be covered with “high-quality snow”, despite the city only having a few days of snow in recent years.

Yanqing, the site of the ski centre, only receives an average of 21cm (just over eight inches) a year of snowfall.

But this venue alone needs more than 1.2 million cubic metres of snow for Olympic events. So instead, for the first time, 100% artificial snow will be used.

The process of producing artificial snow is both energy and resource-intensive. It is estimated that 49 million gallons (222.8 million litres) of water have been used, in a region which is already short of water.

This was an issue that concerned the International Olympic Committee when they were evaluating candidate cities to host the 2022 Winter Olympics.

It said Beijing’s “reliance on artificial snowmaking would require [the] diversion of water from existing reservoirs and may impact other land uses.”

In response to the concerns, Beijing insists the water used for the Olympics accounts for less than 2% of the local water supply. It also says the snow cannons being used need 20% less energy than ones used in previous games.

The organisers wanted the Beijing Winter Olympics to be the “first carbon-neutral Games”. China has set an ambitious goal of delivering the games using 100% renewable energy.

Over six years, the organisers have been constructing new wind and solar projects to deliver enough clean energy, not just for the Games, but for the whole of Beijing.

If you take the government figure for the amount of coal saved, this could avoid 12.9 million tonnes of CO2 emissions annually.

Critics argue that the Olympics green energy pledge should not hide the fact that over half of China’s energy is still produced from coal.

The authorities have also announced restrictions in the Beijing area on vehicles and industries that emit the most CO2. The organisers have incidentally managed to reduce travel emissions by deciding not to let in foreign spectators for Covid safety reasons – with only local spectators allowed.

And they say any remaining emissions will be offset by planting 80,000 hectares (nearly 198,000 acres) of trees around Beijing. But using trees to counter emissions is controversial.

The trees have to grow for 10 to 20 years to remove significant amounts of carbon from the atmosphere, they have to be maintained and – according to a UN-sponsored report on biodiversity – they can disrupt native ecosystems.

How do other Olympics compare?

Concerns have been raised in previous Winter Games, particularly over the issue of the resources needed for snow production.

At the 2010 Games in Vancouver, the authorities were criticised for flying in snow from elsewhere by helicopter.

The International Olympic Committee declared in 2020 that it would “take a more proactive position and leadership role with regard to sustainability”.

However, researchers at Loughborough University in the UK warned in a report this week: “Of the 20 venues used for the Winter Games since Chamonix in 1924, scientists think that by 2050 only 10 will have the…natural snowfall levels to host an event.”