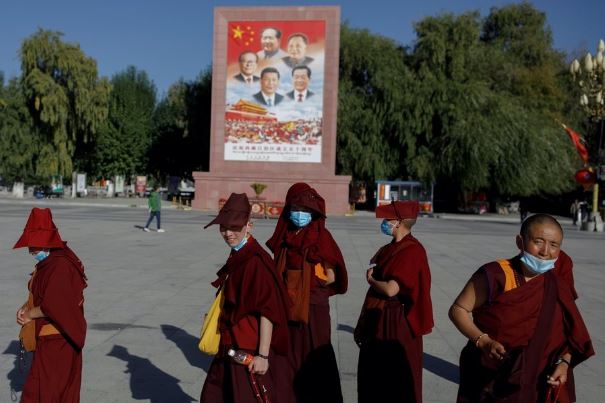 Earlier, to contain Tibetan nationalism, China thought appropriate, though highly childish, to make their own. It was like making a copy of all the technology and designs from all over the world, lacking in quality, as well as reality: Fake.

China outlaws and invalidates reincarnations of ‘living Buddhas’ without government approval. As an example, in 2005, China appointed the so-called 11th reincarnation of the Panchen Lama (the Buddhist order’s second-highest post), who lives in Beijing. The Dalai Lama, in exile in Dharamshala, Himachal Pradesh, appointed another, whose location is unknown. The appointments set the stage for a confrontation over the leadership and future of Tibet, which lies within the territorial borders China marks for itself.

Whereas on 15 August this year, a commemoration ceremony was held at the Kashag Secretariat to celebrate India’s 75th Independence Day. The celebration was led by Sikyong Penpa Tsering and was attended by the Secretaries and senior officials of the various departments of the Central Tibetan Administration.

As the ceremony began, the tricolor Indian national flag was unfurled by Sikyong followed by the singing of India’s national anthem. After the ceremony, Sikyong addressed the media personnel and expressed his congratulatory greetings to the government and people of India on this historic day.

Expressing his admiration for the Indian freedom movement, he said: “It is a well-established history that the Indian national struggle lasted 200 years. By comparison, the Tibetan struggle is in its 70th year

In stark contrast to the rile that Communists of China face from the Tibetan community worldwide, the docile and religiously independent Tibetans gave a heartwarming blessings to India on 75 Independence Day.

Why, according to them, Communists of China do not deserve such blessings?

Chinese Claim: Tibet always been a Vassal State of China

As Feeble as Claim over SCS: Of having shipped/Traded There

As a Lie; a craftily created narrative to brainwash docile and prudent natives, China’s contention that Tibet has been an “integral” part of China since the thirteenth century took shape only in the twentieth century. Ironically, even as late as the 1950s, Chinese writers were accustomed to describing Tibet’s place in the world of imperial China as that of a subordinate vassal state.

At what point in history, then, did Tibet cease to exist as a state to become an integral part of China, is where the sardonic Chinese Communist Party(CCP) argument does a quirky tango with senselessness?

Like Vietnam, Korea, East Turkestan(Xinjiang), Inner Mongolia, and the South China Seas, Tibet’s history is also not unlike that of other of these regions. At times, Tibet extended its influence over neighboring countries and peoples and, in other periods, came itself under the influence of powerful foreign countries like the Mongol Khans, the Gorkhas of Nepal, the Manchu Emperors, and the British rulers of India.

China’s present claim to Tibet is based entirely on the influence that Mongol and Manchu emperors exercised over Tibet in the thirteenth and eighteenth centuries, respectively.

Genghis Khan’s Mongol Empire expanded toward Europe in the west and China in the east in the thirteenth century, the Tibetan leaders of the Sakya school of Tibetan Buddhism concluded an agreement with the Mongol rulers in order to avoid the otherwise inevitable conquest of Tibet. They promised political allegiance and religious blessings and teachings in exchange for patronage and protection.

Tibet broke away from the Yuan emperor before China regained its independence from the Mongols with the establishment of the native Ming dynasty. Not until the eighteenth century did Tibet once again come under a degree of foreign influence.

The Ming dynasty, which ruled China from 1368 to 1644, had few ties and no authority over an independent Tibet. On the other hand, the Manchus, who conquered China and established the Qing dynasty in the seventeenth century, embraced Tibetan Buddhism and had spiritual links to an ever-independent Tibet.

Spiritual links with Tibet have been a fact with India and Nepal since the last 2000years. They do not claim the lands and people of Tibet.

That way, probably China should let Mongolia have sovereignty over 70% of China. Plain Narcissist is the attitude of China towards Tibet, and other regions, which it has either Occupied or lay claims over.

The insecurity-ridden CCP communists of China know no bounds, both of brutality as well as nonsensical persecution. Two days ago, 60 Tibetans found photos of exiled Tibetan spiritual leader the Dalai Lama this week, intensifying a campaign against possession of the banned images.

How in the world, a so-called world power, gets jittery over a figurehead of Tibetan Spiritualism.

Similarly, recently a Tibetan man was pushed off a steep roadside into Drichu (Yangtze) river by Chinese police after he asked them to produce their police identity card. His friend was shot when he rushed out of the car to confront the police.

The two men identified as Sherab Gyatso and Rigdak were travelling from Kyegudo to Domda when they were stopped by police conducting random inspections on the road and were assaulted in a confrontation that followed after they claimed that their vehicle had no prohibited items that needed checking.

This illegal disappearances have been gaining popularity by the Chinese CCP, to subjugate Tibetan identity.

Gyuldrak and Yangrik, the two 19-year-old residents of Darlag county in Qinghai’s Golog (in Chinese, Guoluo) Tibetan Autonomous Prefecture were taken into custody on Tuesday by Chinese police, a Tibetan living in the region told RFA.

The two Middle School students are believed to have drawn police attention by speaking on the WeChat social media platform against a Chinese policy mandating, beginning in September, that all classes in local schools be taught only in Chinese.

Tibetan parents are being instructed to pick up the new Chinese-language textbooks in place of the older Tibetan texts when they go for COVID-19 testing, RFA’s source said, speaking on the condition of anonymity.

The new language policy has already aroused widespread opposition among Tibetans in neighboring Sichuan, where Tibetan private schools have been closed and children sent to government schools amid parents’ concerns for their children’s connection to their native Tibetan language and culture.

Isn’t this how the Reeducation concentration Camps started in East Turkestan(Xinjiang). Shouldn’t Tibetans resist such genocide of their culture, which is by far richer and soothing than what the Communist CCP professes?

These trivial incidents are just indicators to hide, what is becoming a norm in Tibet.

Beijing built and filled massive camps in Tibet, which had been the original testing ground for cultural genocide, political indoctrination, and forced labor.

“When it comes to human rights violations in China, Tibet was Patient Zero,” Lobsang Sangay, the president of the Tibetan government in exile, known as the Central Tibetan Administration, told me during a visit to Washington last week. “Xi Jinping is now reintroducing labor camps back into Tibet: what’s new is the speed and the scale of it and the military-style that they are bringing to it.”

Beijing has forced more than half a million rural Tibetans into these military-style training and indoctrination facilities in just the past six months, Sangay said. Upon their release, thousands of rural laborers are sent to perform factory work or menial jobs in other parts of China, all under the guise of “poverty alleviation,” according to Washington Post’s article.

International law is a system of law created by states primarily for their own protection. As a result, international law protects the independence of states from attempts to destroy it and, therefore, the presumption is in favour of the continuation of statehood. This means that, whereas an independent state that has existed for centuries, such as Tibet, does not need to prove its continued independence when challenged, a foreign state claiming sovereign rights over it needs to prove those rights by showing at what precise moment and by what legal means they were acquired.

With India’s firm stance on its Ladakh and Arunachal Borders against PLA’s belligerence, the Quad forcing Chinese Navy onto its knees, and Taliban-Pakistan alliance threatening to extort more money in lieu of keeping Uyghur Insurgency sedated, China is feeling alarmed in it own backyard.

India, since last 70 years has been fully committal for Tibetan liberation from the clutches of Communist CCP of China. With renewed vigour, China fears India is just beginning to get their back straightened, to help Tibet get their land, people, and freedom back.

On December 21, 2020, the bill, that it is the United States policy that the succession of Tibetan Buddhist leaders, including the succession of the Dalai Lama, be left solely to Tibetan Buddhists to decide, without interference from the Chinese government, was converted into the Tibetan Policy and Support Act after being approved by the U.S. Congress as an amendment to the Consolidated Appropriations Act, 2021.

Hence we saw, for the first time a Chinese President rushing to Tibet, for escalating the timeframe of this Re-education and indoctrination campaign to subvert Tibetans. Xi Jinping’s larger than life ego-narcissist personality wants to negate Dalai Lama’s spiritual significance and replace by his own megalomaniac image, looking for subservience from Tibetans.

Chinese authorities forcing Tibetans to display portraits of Chinese leaders at their homes, replacing portraits of the Dalai Lama

However, this is not the 1950s or the 2000s, and the world is not going to watch China succeed in its nefarious designs. If China succeeds, then next in line shall be Pakistan and other BRI signatories, who shall await their turn.