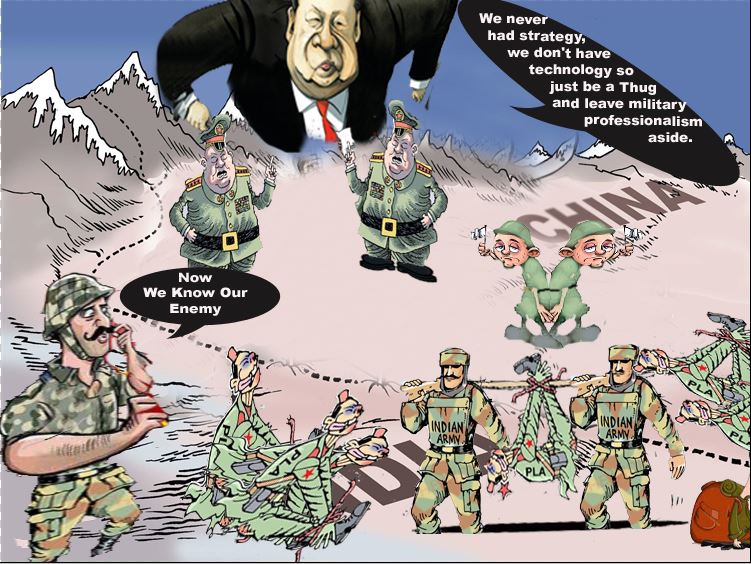 An unheard kind of stand-off, in last 45 odd years post-1967 drubbing of China in Nathu La, was systematically being unfurled last year, as a lead-up to People’s Liberation Army’s(PLA) Galwan brutality.

The first was a violent clash on 5-6 May between Indian and Chinese patrols on the northern bank of Ladakh’s Pangong Tso. Scores of soldiers from the Indian side and PLA’s Xinjiang military district were injured in the skirmish involving 250 men.

A few days later, a second clash took place on 09 May when heated confrontation between Indian and PLA soldiers from the Tibet military district in north Sikkim’s Naku La area again led to violence. Four Indian and seven Chinese soldiers were injured during the face-off involving 150 soldiers.

The third, on 15 June, was the bloodiest and led to the first casualties along the LAC in 45 years. 20 Indian soldiers were martyred when they were Thug-attacked with Spiked Maces, medieval era brutish weapons like barbed wires and sharp edged weapons. This was in contravention to accepted peaceful meeting for with the soldiers along with their Commanding Officer had come. Next when the Regiment got reinforcement, they were prepared, and PLA got to get a taste of their own brutal medicine, when they lost over 40 of their Brute weapon clad soldiers.

Neither it is honourable for a professional soldier to come to fight in such a manner, nor are they trained for such lowly levels of human conduct.

Then who else it was? Someone in the hierarchy?

For 73 days in 2017 at  Dhoklam, the world watched as Chinese and Indian forces faced off in a remote stretch of the Himalayas. The problem started in June when Chinese army engineers attempted to build a road through the Doklam plateau, claimed by both China and Bhutan.

Following request from the Bhutanese authorities, Indian soldiers based just across the border intervened and stopped the Chinese crews in their tracks. After weeks of negotiations, Delhi and Beijing agreed mutually to withdraw their troops to their original positions; China blinked because it had to abandon the project. And a rising star of PLA, was thus discredited: General Zhao Zongqi .

“Our understanding is that the Ladakh standoff was driven from the top, unlike the previous two stand-offs,” a senior Indian government official had remarked. And this sudden change in tactics, of Thugery instead of soldiering, definitely took birth in a Senior Commander’s brain.

Zhao Zongqi lurks In the shadows?

Gen Zhao, had craftily cultivated the reputation of being a ruthless, savage. He joined the military when he was 15 and has consistently been moved up the ladder. A veteran of Tibet, he has served 20 years in the Tibet Military District and is familiar with the Line of Actual Control under this district that includes the tri-junction Bhutan-India-Tibet where the Doklam standoff took place. Gen Zhao, was stationed as commander of the 52nd Mountain Infantry Brigade in 1992, and moved up as a Major General by 2003.

It is only at the level of the top commander that PLA soldiers under different military districts: the Tibet and Xinjiang military districts, would have responded with such striking similarity, an official said, referring to the skirmishes between soldiers in Sikkim and Ladakh in May last year.

Both military districts take orders from Gen Zhao, who was believed to be directing much of the action along with the Line of Actual Control. Chinese sources however, indicate that it was unlikely that Gen Zhao, who is not part of the Central Military Commission but has President Xi’s ears, would be acting on his own.

Who was his pal in thuggery?

On June 5th 2020, Lieutenant General Xu Qiling, of the PLA, was made commander of the Western Theatre Command ground forces, directly under Zhao, and Galwan happened ten days later.

Was the Brutality a mere coincidence, or related to Xu Qiling’s sinster past? A past, in which he demonstrated similar, if not more brutality against Tibetans, Uyghurs and even native Chinese also?

While he was one of the commanders of the Division that sprayed death on the Chinese protesters in 1989 at Tiananmen Square, he has been instrumental in suppressing Tibet since then. From forced indoctrination of Communist ideology to large-scale massacres using PLA for enforced disappearances; removal and deportation of males between the ages of 15 and 60 to prevent protests; confiscation of property from monasteries, private individuals, and former Tibetan officials; imprisonment, deportation, and murder of thousands of people in the resistance movement. His tasks included  transfer of Han majority people into the region; extrajudicial and arbitrary executions; intensive re-education; and widespread torture, and boy did he not excel in all of that?

As a pat on the back, his stint in XinXiang since beginning of this decade, was to replicate what he had done so efficiently in that brutal sublime manner in Tibet. Yes, Xi Jinping had assigned the Uyghur re-education programme and brutally crushing the Uyghur rebellion to this ingeniously devil of a ruthless mind.

What he had presided over in last two and a half decades, he now stands as head of the forces to ensure it is done in same manner.

Abominable Savagery as Military Doctrine a poor substitute for Technology and Strategy?

It is a no brainer, that China has moved little, to achieve a mark in the scientific world of innovation. Let’s go a bit deep, and the brutality of Chinese emperors ensured that the society is restrictive in essence and any knowledge that they could lay their hands on is just forcefully implemented, be it metallurgy and Silk from Indus Valley Civilization, Paper from Egypt: as papyrus and amate (infact India in 2000BC had paper writing available, however in a cruder form), medicine from Siddha and Ayurveda of Indian sub-continent and governance was picked up from India’s ancient form of governance of Mahajanpadas and civil and military service based on Salaries, only 1000 years later.

This left little space for a thinking mind to thrive, but for a mind to obey.

However, given the brutal rule of the sword in medieval China, these techniques flourished owing to strict form of law, implemented under the sword of the emperor. Given the fertile minds of Chinese, they were still restricted to either implementing the borrowed techniques, or being sent on a witch hunt on orders of psychotic emperors like Qin Shi Huang (in 206 BCE), to get irrelevant, like the elixir of life! Such was the unavailability of medicinal knowledge in China, that since then till 17th century, as many as 15 emperors died, upon consuming poisonous materials, while searching for this elixir.

Such examples of sycophancy amongst medical practitioners in China, is indicative of the reign of brutal warlord based rulers, who drive each and every part of society, which mired the blossoming of an inquisitive mind (for innovation and discovery). Whatever was borrowed, was preserved, since China was never invaded and plundered, except by Mongolians, that too when Chinese resisted to pay taxes/tributes.

This absence of innovation and technology is highlighted in this communist rule of the CCP, in this and the previous century. China has simply created an ecosystem of technology theft, and presented it in the worst quality and form. Especially this is seen in the manner of absence of Strategic and tactical Military thinking and implementation.

China lost all wars since 1967 drubbing of PLA by Indian Army, including embarrassment PLA faced against Vietnam in 1979. Their Human Wave attack tactics, reeked not only of absence of strategic thinking, but also of lack of implementing technology.

Coming on to technology, despite of what they have stolen, PLA is unable to get it in a fighting order. Their copied technology based military hardware has no buyers except Pakistan (who also looks towards third world military technology sellers like Turkey, Belarus and even Ukraine for critical platforms like air defence systems, radars and drone technology). List of countries rejecting Chinese military technology is endless, right from Bangladesh, Philippines, Malaysia, Indonesia, African countries and Myanmar.

Technologically, induction of Aircraft Carriers, the much touted threat to the US Navy’s Freedom of Navigation in Taiwan straits, have been brushed aside by all else including Australian and Indian Navies. Supersonic Missiles are yet to surface, and no one has seen the Toy like Stealth aircrafts in action. Radar technology is so woeful, that last year they miss US Navy’s B-52 bombers deep in their airspace, for over 10 hours, and hence rely on Russian radars for the same (S400 are hence vital for China).

Where China is unable to progress technologically and with Military thinking and doctrine, the only last resort they fall back to, is being a visceral brute. The manner in which they control, and restrict way of thinking and living of Mainland Chinese, suppress and exterminate native Tibetans and Uyghurs and try and bulldoze their way around with rest of the world, is indicative of lack of any other sane means of achieving their military and administrative objectives.

In these times, when China is likely to implode, given the dissent from majority Han Chinese, Hong Kong, Inner Mongolia, Tibet and Uyghurs, it is imperative for CCP to go back to the drawing board of 1950s and 60s bloody suppression of dissent in China.

Hence brutish leadership of the likes of General Zhao Zongqi who has been given a promotion and moved to CCP’s inner circle, guiding and prodding the other brute Gen Xu Qiling on, to keep going the same tyrant manner in Ladakh.

He had been successful in Tibet and XinXiang. However getting a bloody nose in Galwan was a lesson not enough for the PLA and CCP hierarchy. They aim to persist with the similar brutish methods that they have become accustomed to, in CCP’s occupied Han regions, Tibet and XinXiang.